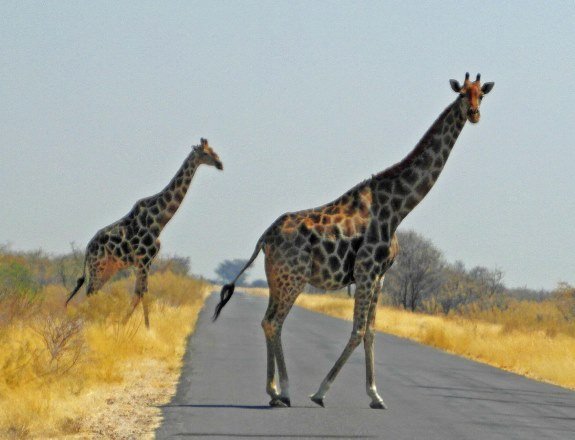 Normally Michael doesn’t shriek like a tween girl who just found out One Direction was breaking up. But he was this day. Being up close to the open jaws of a lion will do that to you.

We had arrived in Africa a few days earlier for a safari so Larissa could fulfill her long-time dream of seeing wild animals in their native habitat. Michael is more of a city boy, more comfortable with concrete than trees, so while he was coming along reluctantly as the good husband, he had his doubts about how this bout with nature would turn out.

During our travels around the world we met up with several people who just gushed about visiting Namibia, located on the southwest coast of Africa. Its main attraction is Etosha National Park, located about 250 miles north of the capital city of Windhoek. 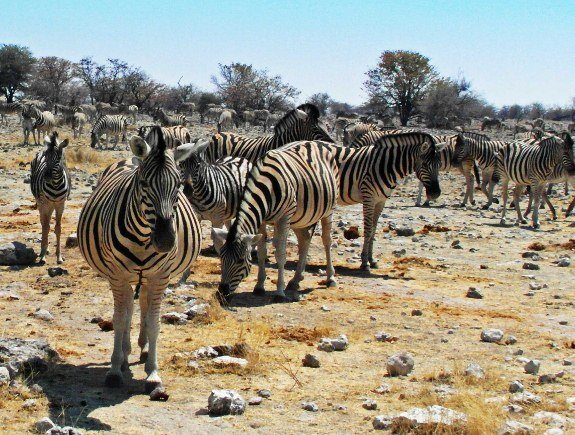 About the size of New Jersey in the United States or Slovenia in Europe, Etosha surrounds a vast, blinding white saltpan and provides one of the best wildlife viewing areas in all of Africa. On any given day a visitor can spot elephants, zebras, giraffes, lions, springbok and, with a bit of luck, elusive rhinos, leopards and cheetahs.

We were riding in the park on a guided game drive in an open air Land Rover, making sure not to leave our arms dangling outside of it. Our safari driver, Ismail, knew all the hot spots or, in this case, wet spots as he sought out the waterholes where the animals congregate.

Within minutes of entering the park gate we spied a pair of giraffes loping across the road with their signature languorous stride. Despite a childhood spent leafing through animal photos in the glossy pages of National Geographic, nothing prepared us for seeing these animals up close in their native habitat. Surprisingly, Michael was enthralled as he watched the mesmerizing pace of the giraffes. We clicked through what would have been several rolls of film in the pre-digital era in about five minutes. Ismail’s gentle smile let us know that “You ain’t seen nothing yet.”

After 20 dusty minutes on a gravel road we reached the Nebrowni waterhole, where hundreds of zebras were eagerly quenching their thirst. Sprinkled among them were springbok, dik-diks and impalas.

We watched the animals for a spell and were just about to leave when off to the right three mammoth leathery gray piles lumbered towards us. The elephants plodded along with a slow-motion rumbling gait, with their big ears flopping back and forth.

As the elephants made their deliberate progress towards the waterhole, the zebras got a bit restless. Most of them had seen this movie before and scurried away before the gargantuan onslaught. 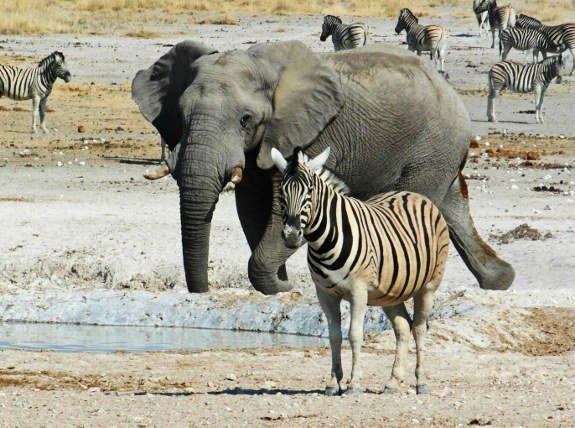 When elephants show up at a waterhole it’s the equivalent of the chubby kid cannonballing into the pool at a swanky hotel. Everyone else gets soaked and figures out that it’s time to leave the party. It was no different here. The zebras and springbok crept away and meandered aimlessly while waiting for the big boys to have their fun.

The elephants weren’t content to just drink the water like the other animals. They plunged right in, splashing and swinging the water around with their trunks. They played for an hour, as delighted as schoolchildren on the first day of summer.

After this adventure, we drove down a rutted gravel road through scrub pine for two or three miles where we happened upon another watering hole where a herd of thirty elephants were cavorting in the mud; the larger ones pushing the little ones aside until they swigged together at the equivalent of the “kid’s table” at the end of the pond. Elsewhere giraffes crouched into their distinctive splay-legged wide stance so they could reach down with their long necks and slurp some water. Hours slipped away as we enjoyed front-row seats for our very own live-action nature film. Elephants here, zebras there . . . hey, there goes a pack of ostriches. 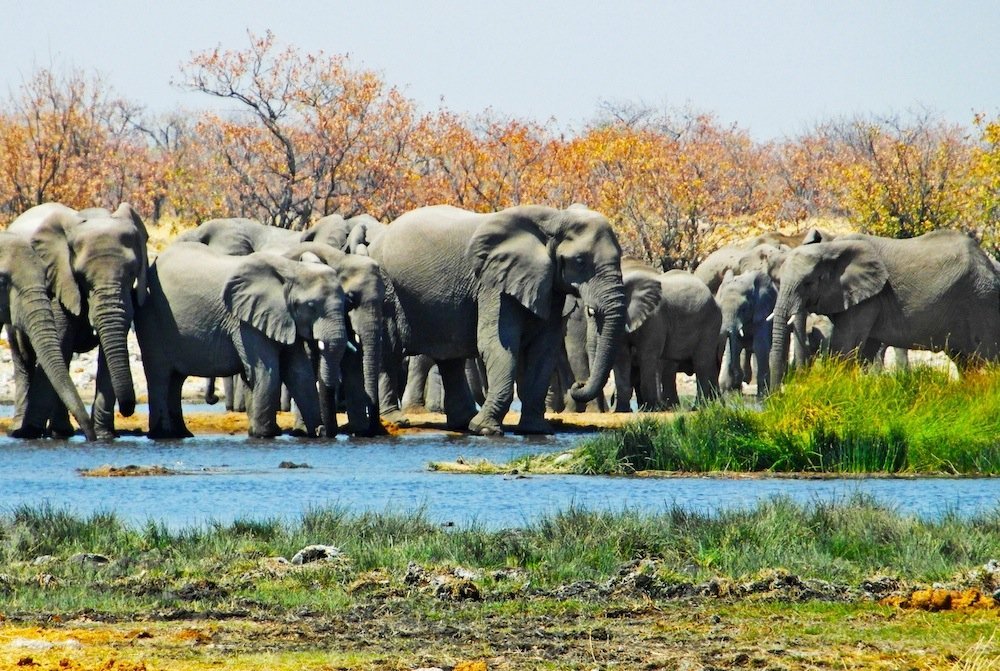 At one point Ismail pointed out a large animal about 20 yards off to the side of the Land Rover plodding through the bush. At first, all we could see were branches being disturbed but then we focused on a sight that is rare indeed, the elusive white rhinoceros. It was so close yet we never would have seen it without our guide’s trained eye. This time we put the camera down and enjoyed the moment. We were experiencing one “pinch me, I can’t believe I’m here” moment after another.

Later that evening, as the setting sun was casting a golden glow on the savannah, we got a bit more than a pinch. We had stopped on the narrow shoulder of the road and parked over a culvert to take some photos of the sunset. Meanwhile Ismail was dropping rocks onto the culvert. He said lions sometimes sleep there to escape the heat and this would bring them out. (That maxim about not waking sleeping dogs, doesn’t it apply to lions too?) But guess what: his technique worked, perhaps too well. 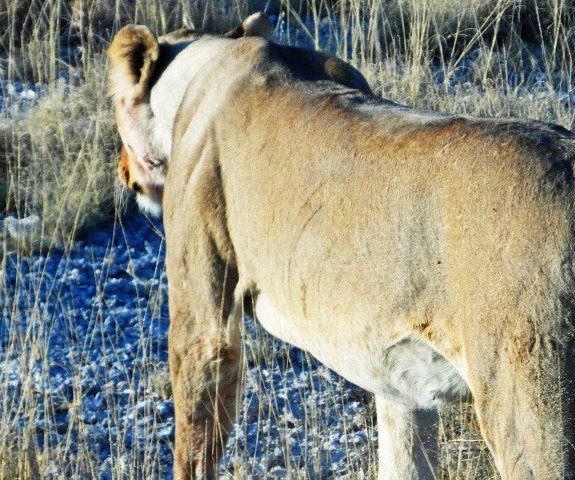 Suddenly a lion, or in this case a lioness, leapt up out of the culvert where she appeared at Michael’s dangling elbow. And that’s when the shrieking started. Fortunately, the lion didn’t seem all that interested in us, or was just so shocked at the sight of a grown man whimpering so much, that she sauntered away with nary a care in the world as she returned to her nap.

Michael was a bit stunned at first, as were we at his shrieking, but like a little kid who loves being tossed in the air and repeatedly asks for more, he said, “Hey, can we do that again?” City boy was becoming nature boy as our adventure in Africa continued. 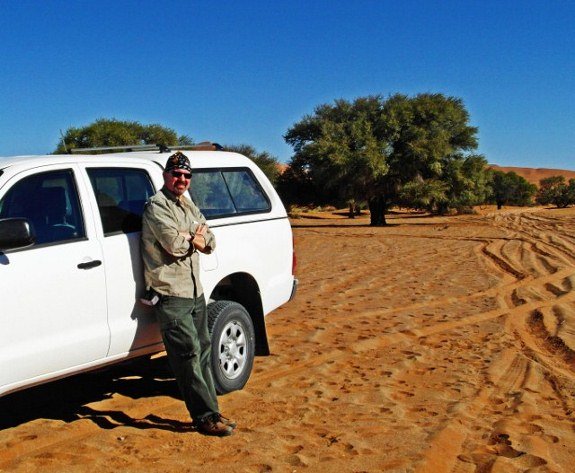 For those to whom a trip to Africa is the trip of a lifetime it’s a must-see, and as Michael proved, even those for whom it’s not on the radar will experience unforgettable moments that are not available anywhere else on Earth. Just be careful if you wake up a sleeping lion.

Note: This post has been sponsored World Expeditions as part of their #WEVentureOut series. We are proud to have our “Waking a Sleeping Lion” adventure featured in this series, which encourages travelers to step outside their comfort zone and experience more of the world. For more information on trips to Africa and other unique destinations, visit the World Expeditions website. 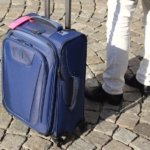 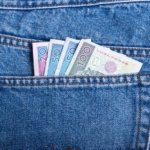 Should you pay in local currency while traveling?
Scroll to top