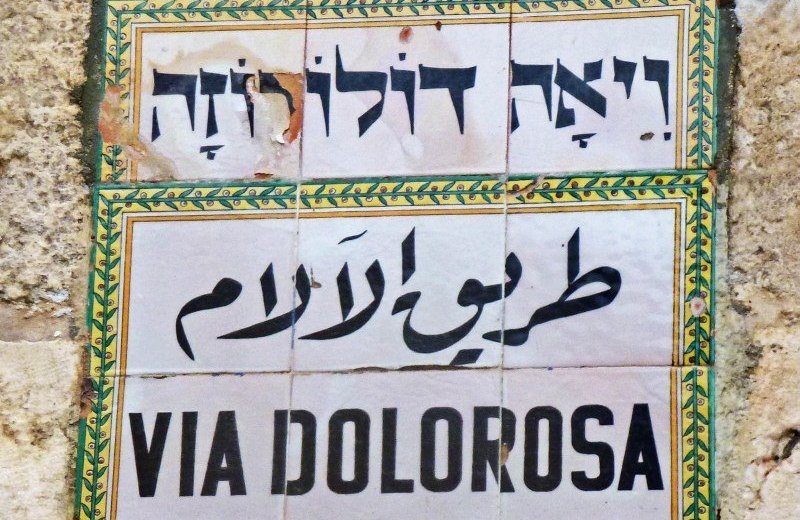 The Via Dolorosa in Jerusalem is the traditional path that Jesus walked on the way to his crucifixion. Following the fourteen Stations of the Cross up the hill towards Mount Cavalry is a pilgrimage for Christians worldwide who descend in droves onto the narrow path. Some come alone while others are part of groups singing religious hymns in many languages along the way. In this multi-lingual city where signs are in Hebrew, Arabic and English the Via Dolorosa stands out for still retaining its Latin name. 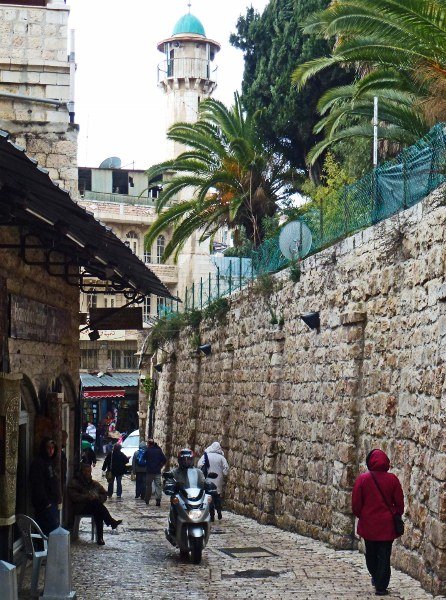 This is a wide part of the path near the starting point.

We walked the Via Dolorosa on an appropriately dreary, rainy day. Surprising for a site that attracts millions from all over the globe, the walkway and stations have not become touristy attractions. In fact, some of them are even hard to find. We were pleased to see that Christ’s path to crucifixion remains a humble route and has not become Disneyfied. 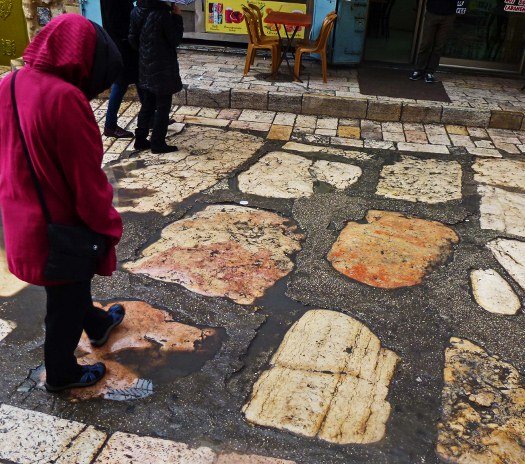 Some of the paving stones are from the Roman era of 100 BC. 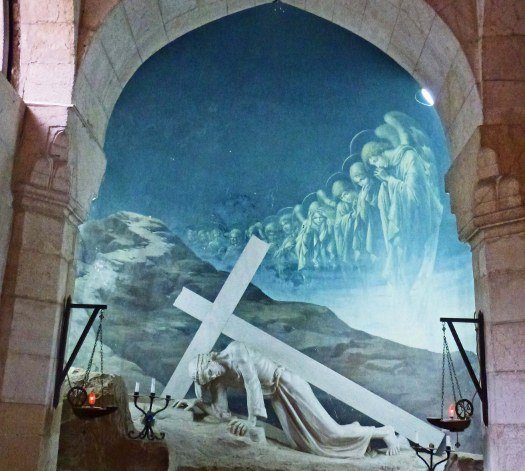 This chapel marks the 3rd station where Christ fell. 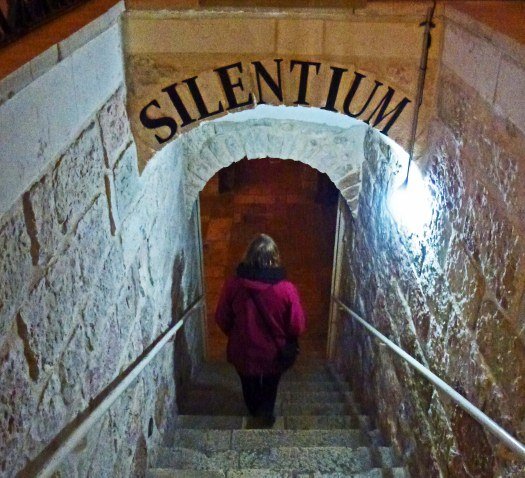 Underground chapel at the 4th station where Jesus met his Mother. 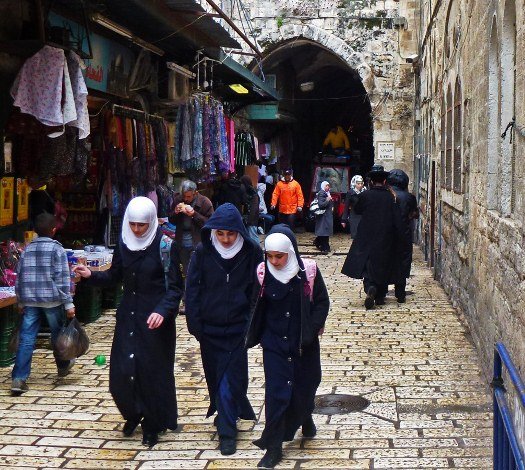 A blend of cultures on the Via Dolorosa. 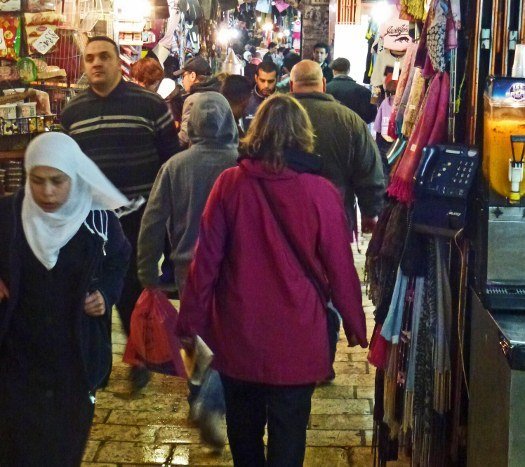 The path winds through the Arab market.

The only sour note is at the Church of the Holy Sepulchre, which straddles the site of Christ’s crucifixion, burial and resurrection. There have been violent disputes over the centuries between various Christian sects that are engaged in a turf war over which one controls this most holy sight of the Christian faith. In 2008 a brawl between Armenian and Greek Orthodox clerics had to be broken up by the Israeli police. To help keep the peace a Muslim family has been entrusted with the only key to the church for over 1,400 years.

An agreement that was signed by all parties in 1853 called the “Status Quo” was supposed to solidify which of seven different Christian sects controlled which part of the Church. However the window ledges remain disputed territory. In the picture below there is a ladder leaning against a window over the entrance. Supposedly it has been there since at least 1852. There is no consensus about which group can move it. It makes one wonder that if different groups of the same religion can’t get along, what does that bode for a city that is a cradle of Judaism, Islam and Christianity?

Walking the Via Dolorosa is a moving experience on two levels. For Christians, following the path of Christ is literally a religious experience. For others it is a unique opportunity to walk in the footsteps of a major historical figure. 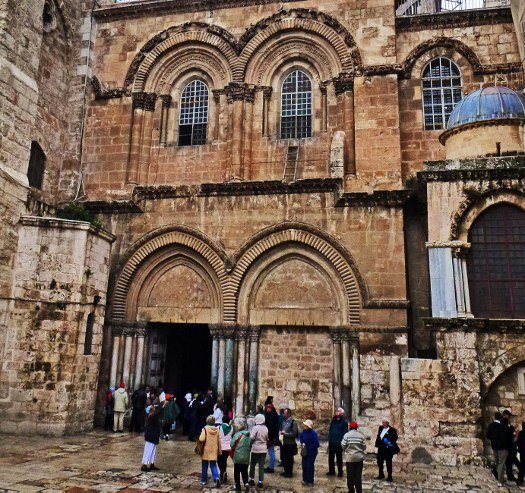 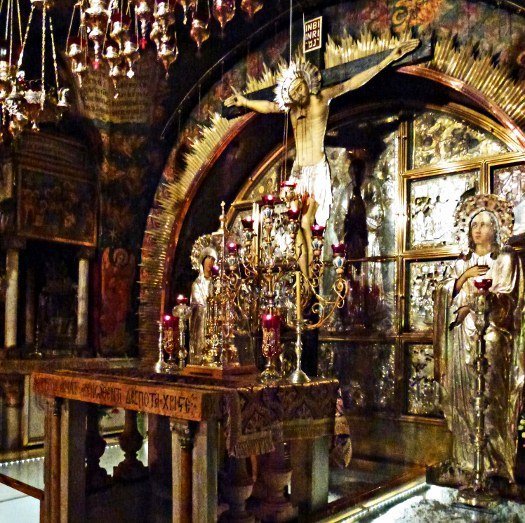 Golgotha, believed to be the actual crucifixion site. 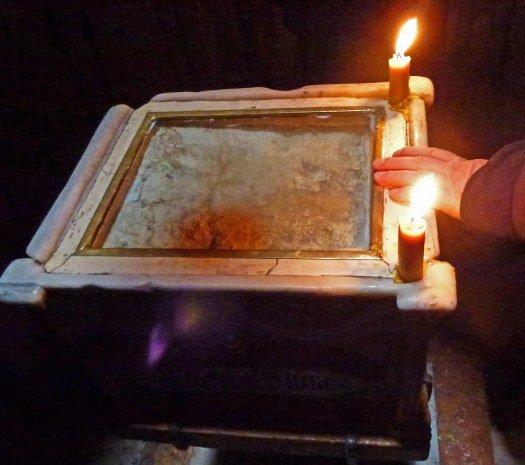 The stone that according to tradition covered the tomb. 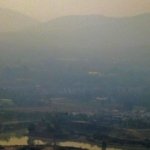 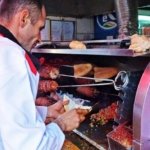