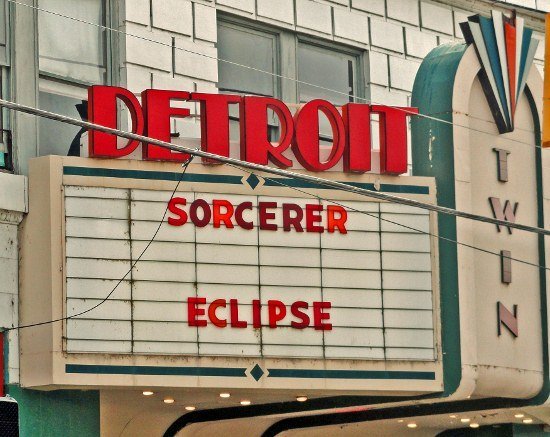 American Art Deco movie theaters were once the hot item throughout the country. A small town knew it was moving up in the world when a movie theater opened as it quickly became the hub of social life. Their Art Deco design evokes a time when people actually watched movies in theaters, and not on a big screen TV at home or on their cell phone.

Gradually multi-screened megaplexes opened on the outskirts of town where land was cheap and plentiful. The old movie houses with their specialized architecture and construction became white elephants. Many were converted to other uses or demolished. 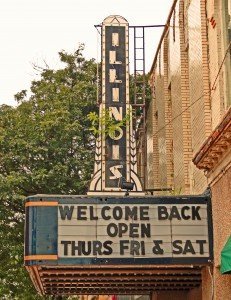 However, these things go in cycles and over the last three decades historic movie theaters have become more appreciated. Many have been bought by not-for-profit groups who have renovated them and converted them back into movie houses; some showing independent films while others are able to compete with modern theaters showing the latest Hollywood blockbuster.

A thriving renovated theater is a sure sign that a town will also have many other amenities to offer: from used bookstores to coffee shops to funky retail stores. A town with the vision to renovate, rather than demolish, its historic structures is at the leading edge of creating a better quality of life for its citizens. 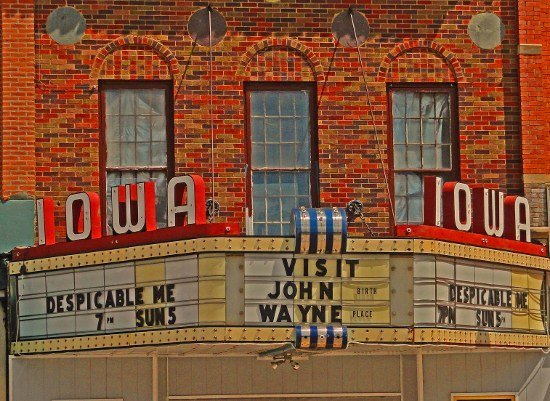 It would be a real shame if the town of Winterset could not support its own Iowa Theatre. After all it is the county seat for Madison County of Bridges of Madison County fame; plus the birthplace of John Wayne is just a few blocks away. Although the theater usually presents only one film a week, it does host continuous showings of The Duke’s films during the annual John Wayne Birthday Celebration which takes place in May. 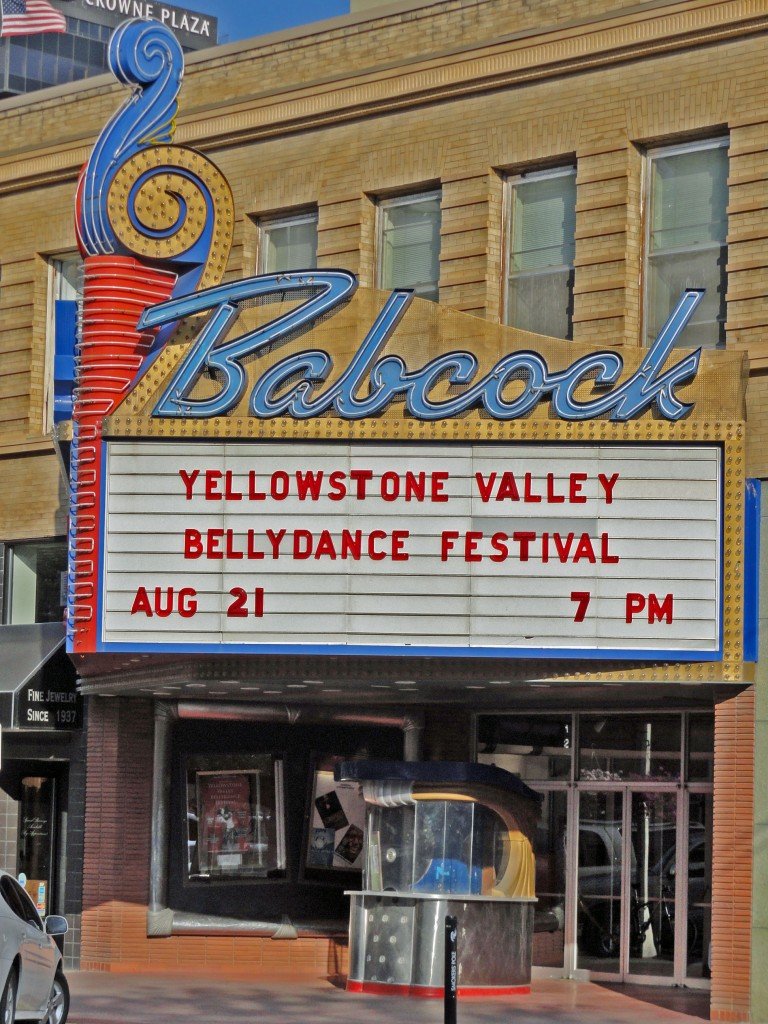 The 750-seat Babcock Theater was built in 1907 and is currently undergoing a renovation by its new owners. Unfortunately I was there a few weeks too early for the Yellowstone Valley Bellydance Festival. But I heard it was a hoot.

Oddly enough the Detroit Theatre is not in Detroit but Lakewood, Ohio, a suburb of Cleveland. The theater had been thrilling moviegoers since 1923 when it closed a few months after I took this picture. Owner Norman Barr said the two-screen movie house could no longer compete with the amenities of modern theaters. 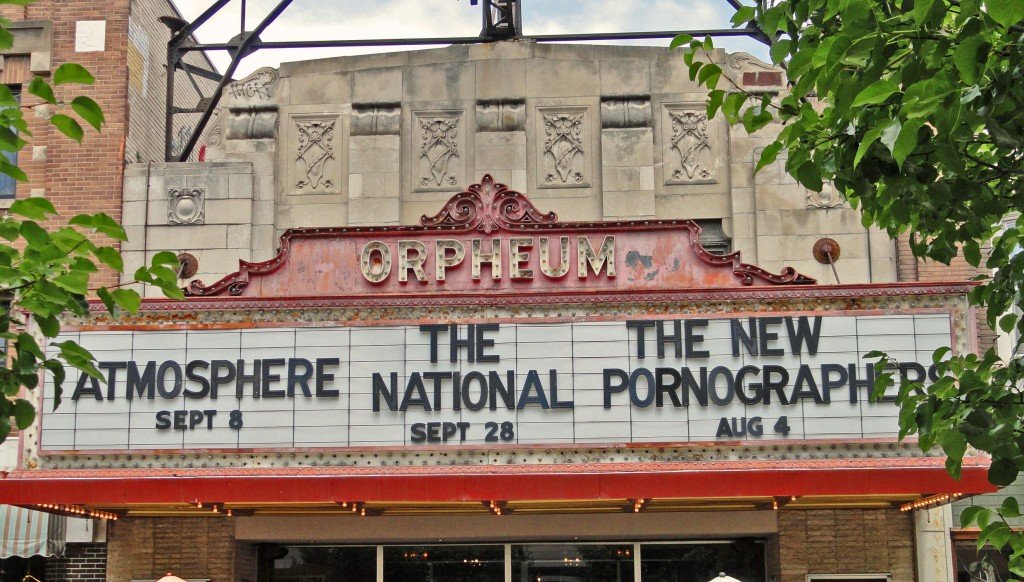 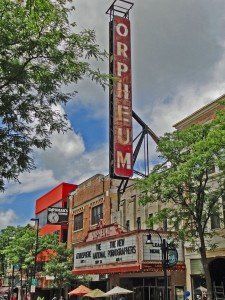 This former vaudeville theater in Madison has hosted live events as well as first-run movies throughout its 85 year life. Live shows have ranged from Frank Sinatra to Buddy Holly to newer performers such as The New Pornographers as seen in the above marquee. The large vertical sign attached to the facade is an Art Deco touch that is visible throughout the Wisconsin state capital. 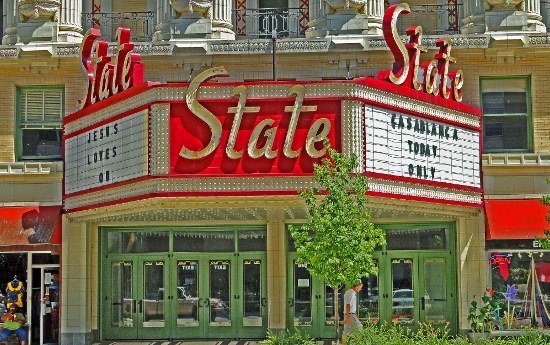 The State Theater in South Bend has witnessed many ups and downs in its ninety year history. In 1934, John Dillinger robbed his last bank just up the street before he was killed a month later while walking out of a theater in Chicago. In 2005 it was purchased by a Christian group but they were unable to turn it into a successful venture. When I visited the marquee said “Casablanca Today Only” on one side and “Jesus Loves You” on the other. The last I heard the theater is closed and being put up for auction once again. 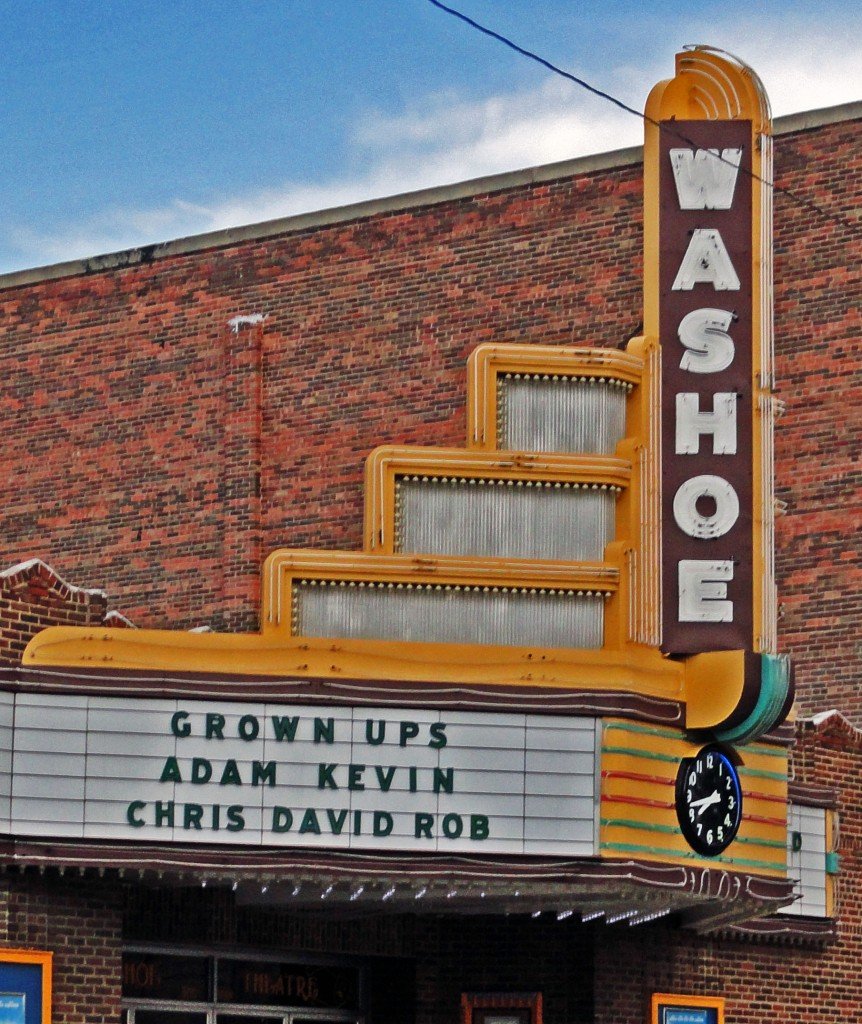 Opened in 1936, the Washoe Theater, along with Radio City Music Hall in New York, were the last American theaters to be built in an Art Deco spinoff known as Nuevo Deco.  Since Anaconda was the company town for the hugely successful mining company of the same name, money was no object when the theater was built.The interior of the Washoe is stunning. So much so that the Smithsonian Institution selected it as the 5th most beautiful theater in America. 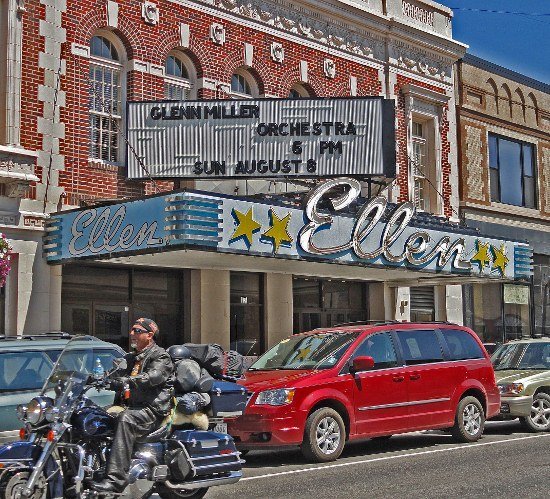 The Ellen opened in 1919 and was the place to see the latest silent films. It was restored in 2008 and now focuses on presenting live theater. 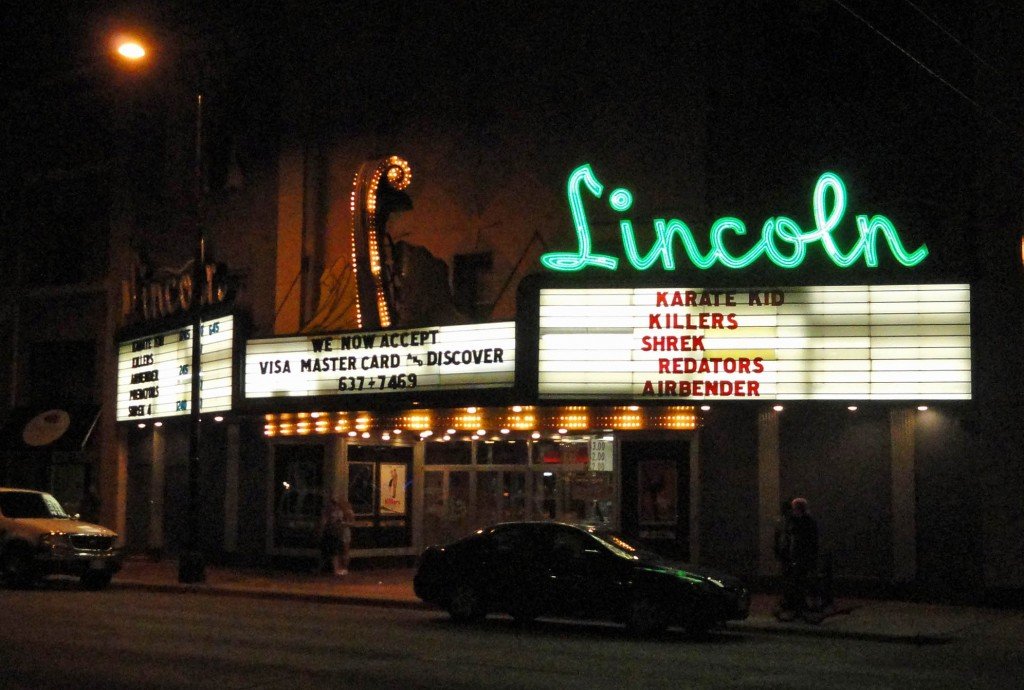 The Lincoln Theater is a well-known landmark for motorists traveling America’s first coast-to-coast road, the old Lincoln Highway.  The 1950’s Art Deco style cinema still charges only $3 for a ticket. 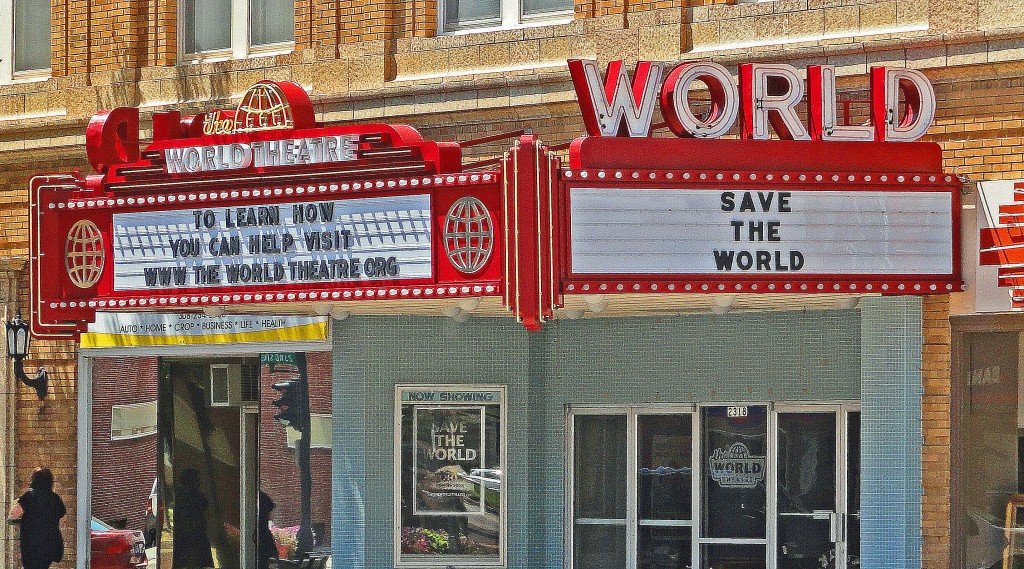 At one time Kearney, Nebraska must have been all that. It had not one but two theaters in town. Unfortunately only one is currently showing films. The World Theatre opened in 1930 but closed in 2008. A not-for-profit group has reopened it for weekend screenings of select films.  I like the clever theme for their fundraising campaign, “Save The World.” For more information go to their web site at World Theater. 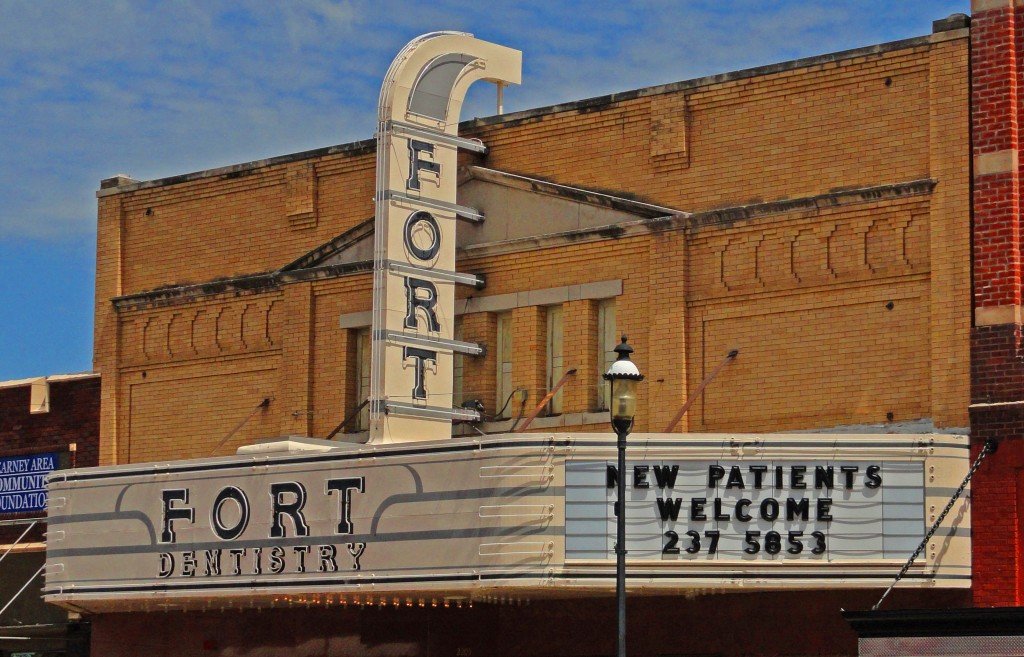 A few blocks from the World, the Fort Theatre occupies a prominent place on Central Avenue. It was originally built in 1914 in a Classical Revival style with decorative brickwork laid out in a Greek temple motif. After a fire gutted the building in 1940 it was gussied up with its current Art Moderne marquee.

But the only film you’ll see there today is an X-Ray of your overbite since it is now the offices of Fort Theatre Dentistry. In lieu of an upcoming film the marquee states “New Patients Welcome.” The original lobby has been retained and converted into a waiting room complete with popcorn popper and red velvet ropes. As adaptive reuses go it’s pretty clever; better than tearing the old theater down as has happened in so many small towns across America. 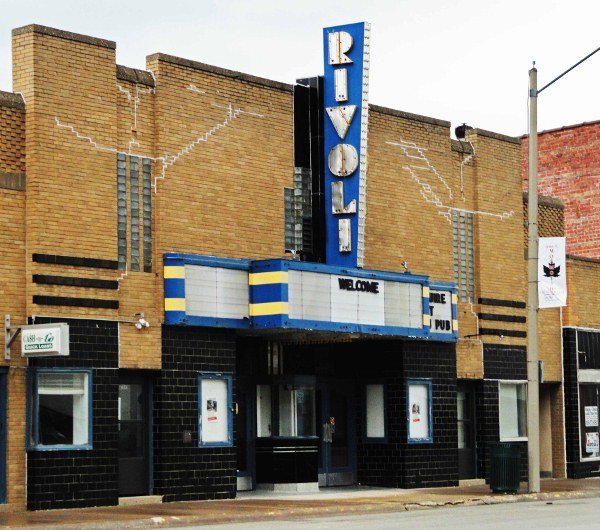 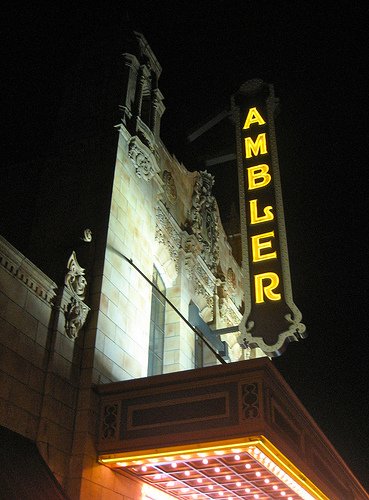 The sad-looking Rivoli hasn’t shown movies in years but does host the occasional concert or blues festival. I hope the World Theater people are successful in their efforts. In my former hometown of Ambler, Pennsylvania I witnessed firsthand what a successful theater restoration can achieve. The 1920’s-era Ambler Theater was a gorgeous Egyptian Revival monument to the Golden Age of film. However it had become dilapidated and was only open once a month to show rarely viewed Christian films. A not-for-profit group purchased the theater with public and private funds and restored it.

Despite being in the heart of the Philadelphia suburbs, Ambler had no restaurants before the theater was renovated. Within a few years of its restoration it was joined by nine restaurants along with shops and a live performance theater. What had been a deteriorating downtown became a thriving hub for nightlife and dining.

As I drove across America I passed through many towns that were centered around an abandoned theater. Some of these theaters still operated, some had been converted to other uses and some were outright abandoned. With the right type of local pride and energy these theaters could serve as the springboard for a Main Street revival in each of these towns. It will take a great deal of vision and hard work on the part of the civic leaders but the end result, saving their town, will be worth it.

From the Smithsonian: Traveling with the Rocky statue in North Korea 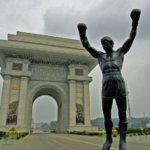 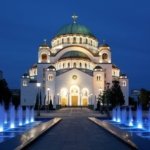 Free things to do in Belgrade: One of Europe’s oldest cities
Scroll to top