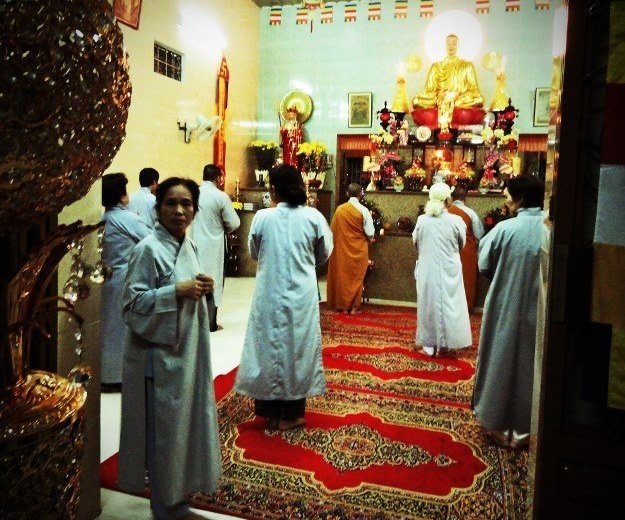 During a nighttime stroll, we had become lost in the dimly lit, maze-like streets of old Saigon. A series of turns led us into a narrow alley whose sole purpose seemed to be connecting to other alleys. The winding streets felt as though laid out by a two-year-old chasing a kitten.

Locals, cooking their dinner on sidewalk grills, looked at us with amusement, while children stopped their games for a moment to point at us and giggle; obviously, we were well off the tourist path. One elderly man, sporting a wispy Ho Chi Minh beard, waved us away from one alley and pointed to another. We followed his advice, but ended up at a brick wall. Now what?

From an open-air building off to the side, a slight woman in her twenties, head shaved clean and clad in a plain gray robe, approached us and calmly said, “Come in.” Because we had no idea where we were, and only a vague idea of how to get back, we took her up on the offer. 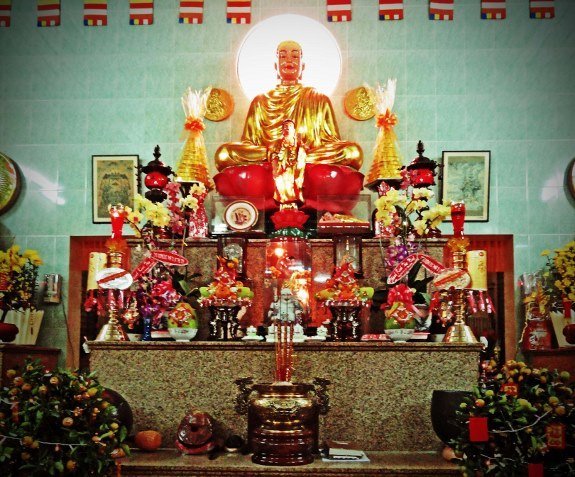 Somehow, we had stumbled into the Châu Lâm Pagoda, a Buddhist convent, on the busiest day of the year – the Tet holiday. Sister Huê Chi led us inside to meet the Master of the convent, an elderly woman whose commanding presence belied her short stature. In the background, a nun struck a gong at regular intervals as the others chanted prayers to Buddha. Fragrant sandalwood incense from burning joss sticks wafted over us.

The Master led us by the hand to a table, where other nuns scurried to present us with traditional Tet dishes of sticky rice and bright orange mangoes. After finishing our impromptu dinner, we were led into the sanctuary. 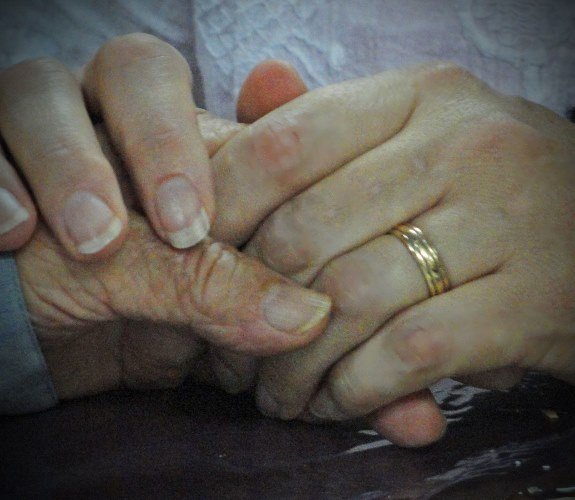 Saffron-robed nuns bowed in rows behind small silver tables bearing prayer books. Their hands remained clasped together and their heads lowered as they shot curious sideways glances at us; the only Westerners there. Whenever we made eye contact we were met with a soothing smile. A few minutes later, we joined them in kneeling in front of a yellow-and-red altar dedicated to Buddha. 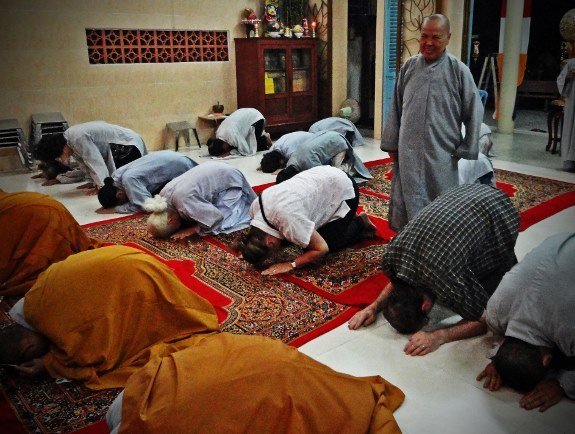 This magical event hadn’t been planned; in fact, we had gotten quite disoriented that evening. Though instead of pulling out a map or checking our GPS position on a cell phone, we decided to roll with it. It’s fun to plan your vacation ahead of time, but we find it’s best to just have a broad outline of what you want to see or do. Leave time for those serendipitous events that pop up out of nowhere and are impossible to schedule. Sometimes, to find the most interesting things, you just have to get lost. 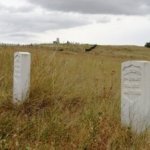 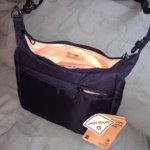 10 tips for women to avoid pickpockets
Scroll to top