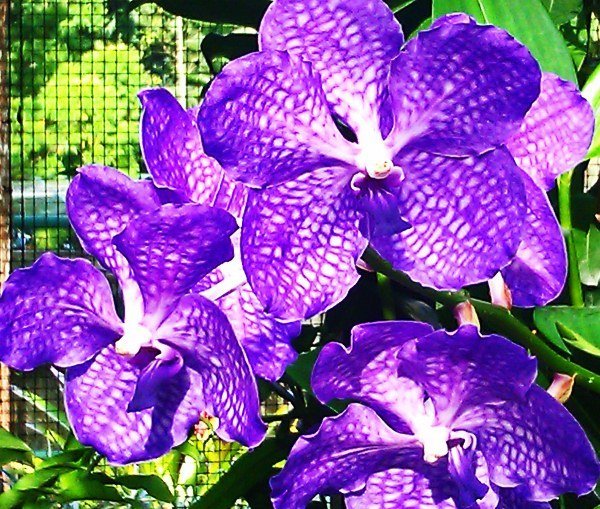 The city-state of Singapore is an intriguing place. An island perched at the tip of the Malay Peninsula, it’s a major trading port where goods have been exchanged among China, India and Arabia for centuries. Eventually a wide array of cultures emerged. In the early 1800s Great Britain colonized Singapore, providing this Asian melting pot with a dash of European flair.

We were only there for a few days, so to see as much as possible we decided to split up for a day in Singapore. Fortunately we knew some native Singaporeans who would be our guides. Constance volunteers at local museums while Russell is a student of history and an endless purveyor of trivia. If you have more time to spend in the city, you can find budget Singapore hotels to stay in. 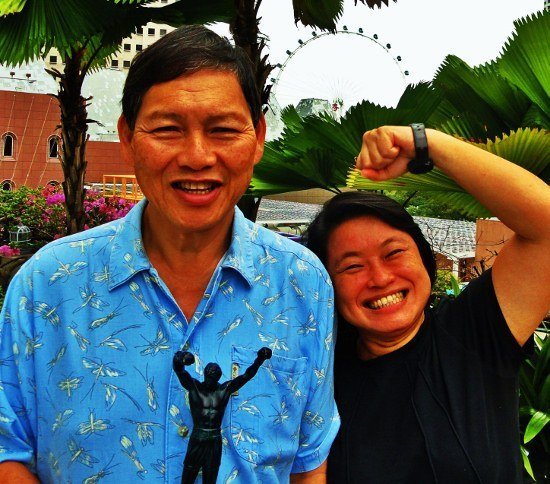 Our fact-filled guides, Russell and Constance.

We planned to divide and conquer. Michael and Russell would have a typical guy day and tour sites related to Singapore’s pivotal role in World War II. Larissa and Constance designed a more refined tour, learning about both local culture and horticulture.

A day in Singapore

He Saw: The Fall of Fortress Singapore by Michael

Russell and I watched a Singapore Air Force F-16 fighter plane roar overhead as the pilot maneuvered into ever tightening circles. The high-pitched screams of its engines provided a thundering counterpoint to our quiet stroll through the manicured lawns of the Kranji War Cemetery, the final resting place for thousands of military personnel killed in the World War II battle for Singapore. The British lost this battle to the Japanese, leading to the largest surrender of British forces in their long history.

The names on the headstones revealed the extensive reach of the British Commonwealth at that point. Alongside typically English names like Kirby, Lyon, and Roberts are Ibrahim, Abdul and Muhammad. Most of the world’s major religions are represented, at one time all fighting for a common cause. This ignominious defeat was the first step in the dismantling of the British Empire; the one on which the sun never set. 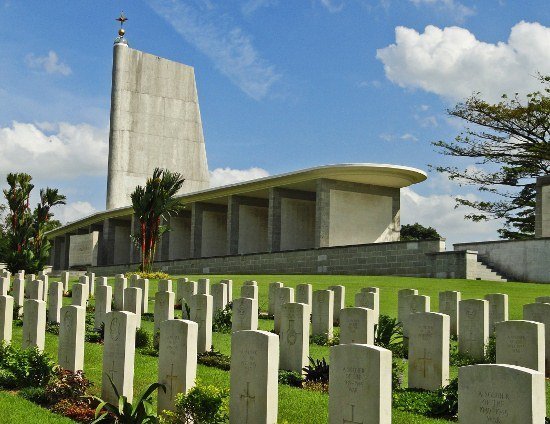 Earlier we had visited Fort Canning, site of the Battle Box, a series of bomb-proof underground bunkers where British commanders led the doomed defense of Fortress Singapore in February, 1942. These impregnable concrete structures lay buried and undisturbed until their rediscovery in 1988. The doors were still locked, just as the Japanese left them when they eventually surrendered to Allied forces. When reopened they were unchanged; in some rooms Japanese handwriting still covered the walls.

A guide handed us headsets before leading us into a damp, fetid bunker. Without warning the lights flickered and the sounds of bombs dropping reverberated in the headsets. The special effects gave us a small sample of what it was like for the British soldiers as they withstood the Japanese attack.

In a concrete meeting room life-like figures reenact the mounting tension of the British officers as the island’s supplies dwindled. Visitors are drawn into the painful conflict of commanding officer Lt. Gen. A.E. Percival as he wrestled with the dreadful decision to hoist the white flag. 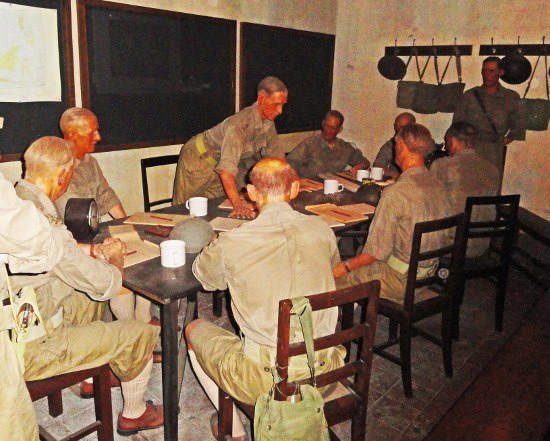 Touring the Battle Box with Russell was particularly poignant. The war took place before he was born, but his father, mother and older brother were among the last to leave Singapore before its fall. Their ship was captured and they remained prisoners of the Japanese for the remainder of the war.

After watching the intense debate about the decision to capitulate, we drove to the Old Ford Factory, to see where the actual surrender took place on Feb. 15th. The factory was commandeered by the Japanese as their Army headquarters during the battle. It sits on a hill so visitors trudge up the same driveway as Percival and his small entourage on their dreadful mission to hand over the British flag.

For such a dramatic event, the actual surrender took place in a rather prosaic place, the main conference room used by Ford executives. It’s set up just as it was when the Japanese and Commonwealth officers squared off on opposite sides of the table. A tape recording replays the agonizing moment when the British general reluctantly gave in. Additional exhibits tell the story of the harsh conditions imposed on civilians who were not able to escape Singapore before the onslaught.

Back at the Kranji War Cemetery I thought about the awful consequences of the war. My gaze rose from the lines of headstones up to that fighter plane circling overhead and wondered, over 60 years later, what lessons have been learned?

She Saw:  The People of Singapore, Four Hundred Years of Blended Culture by Larissa

I wanted to see some of what makes Singapore a unique blend of cultures. Our first stop was Little India; a neighborhood burgeoning with shops selling all things Indian, from spices to saris. We browsed in the food and fabric halls. Of special interest were the tofu stalls, selling the multiple varieties of soybean product so essential in vegetarian Indian cooking.

It was late morning, so Constance suggested a snack. We walked over to the food hall, known in Singapore as a hawker stall. Briyani kiosks vied with those selling chapatti, curries and anything else I’ve ever seen in an Indian restaurant. The sound of papadams sizzling vied with the hawkers calling out their daily specials. The aromas wafting over my head included chilies, coriander and a hint of cinnamon. Wanting to try something I hadn’t seen before, I chose a mutton curry. It was served on a banana leaf, a signature of Singapore. 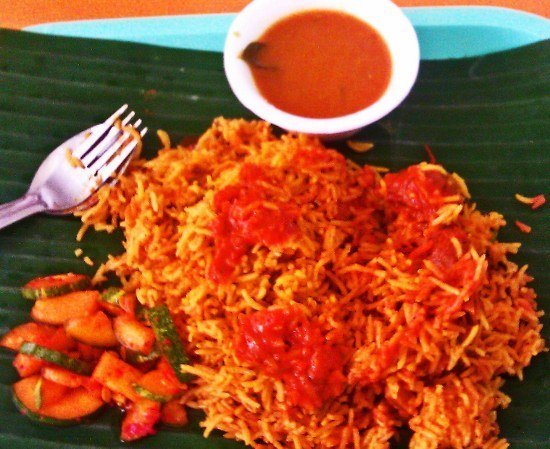 Thus fortified, we made our way across town to visit the Peranakan Museum. Housed in a former school, the museum presents the story of the combined Chinese and Malay culture that emerged in the 15th century. Singapore was a major trading port along the Malacca strait. Situated in a protected spot where Asia meets the Indian Ocean, the port was ideally situated for the exchange of European and Asian goods.

Wealthy Chinese merchants spent half the year living along the Malacca Strait, eventually marrying local Malay women. These blended Chinese/Malay families became known as “Straits Chinese” or Peranakans, a derivation of the Malay word anak, which means “to give birth to.”

Peranakans, didn’t fit into Chinese or Malay societies, so they quickly established their own. The wives became excellent businesswomen, maintaining the family shipping concerns while their husbands returned to China for part of the year. An entire matriarchic culture evolved with unique foods, dress and furnishings. 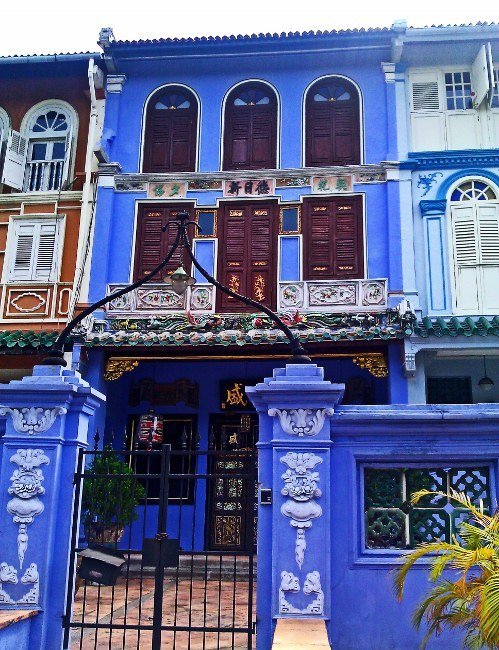 Constance is a docent at this museum, so today she acted as my private tour guide. She led me through exhibits featuring various aspects of Peranakan daily life over the past 400 years. A series of interactive displays, especially the section on clothing, made it a fun tour. Even grown women (including us) could play “dress up,” trying on the sarongs and kabayas; the skirt and blouse combo unique to Peranakan women.

We left the museum and drove to the Blair Plain Historic District, the last remaining example of a Peranakan neighborhood in modern Singapore. Row houses in vivid shades of periwinkle, turquoise and tangerine cluster together on narrow streets, each displaying decorative tiles and ornate plaster ornamentation.

Inspired by the colors displayed in Blair Plain, we moved on to see color in nature in the form of orchids. Singapore boasts the largest outdoor orchid display in the world at the National Orchid Garden.  Orchids are finicky but the moist equatorial climate is perfect for them so they grow in abundance.

Over 600 varieties are shown at any given time, drawn from more than 2,000 species in the Garden’s collection. Orchids of every shape, color and size jostle for space and spill over onto walkways, drape from arbors and peek out from under trees. Petals of crimson and jade vie for attention with more traditional purples and whites, a wildflower meadow on tropical overdrive. Fortunately there are numerous winding paths that allow the visitor to absorb this splendor at their own pace, often with no one else around.

This natural beauty made it easy to understand why so many diverse cultures wanted to be a part of Singapore. The result is a blend of sights, aromas and tastes that are hard to resist.

Singapore also has one of the most entertaining airports in the world. Travelers even try to have a multi-hour layover there. Click the link to read about the Singapore Airport.

The colorful trishaws of Malacca 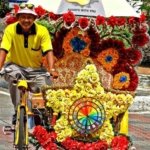 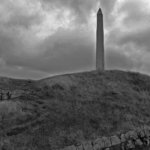