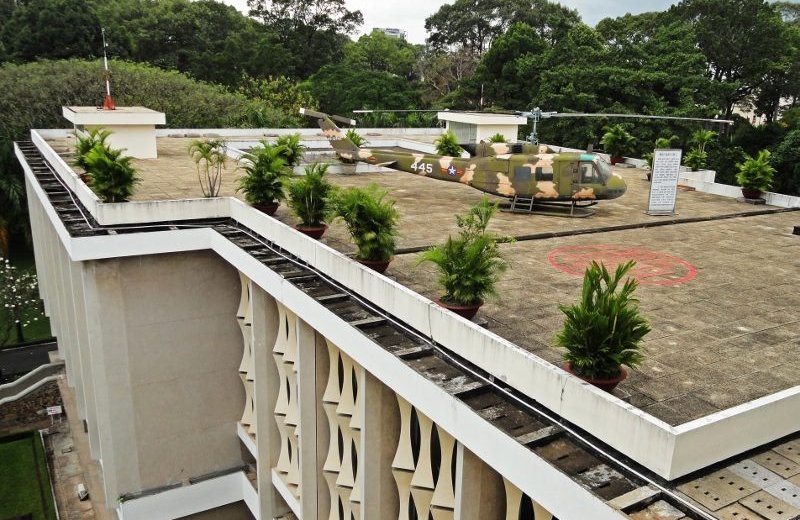 The echoes of war have gradually faded in Vietnam as the country has rebounded from decades of conflict to create a thriving modern economy; one sign of the forward looking times, former adversaries are now welcomed. There are plenty of ways to see Vietnam, visiting Vietnam today is an eye-opening experience, particularly for an American visitor.

Ho Chi Minh City is now booming, not from gunfire as before but commerce. New skyscrapers pierce the low-lying haze while the bicycles of yesterday have been replaced with over 2,000,000 motorcycles, creating a buzz both literally and figuratively. But during a 2-week vietnam itinerary there are still many opportunities to experience vestiges of the the former war-torn country, including the city formerly known as Saigon. 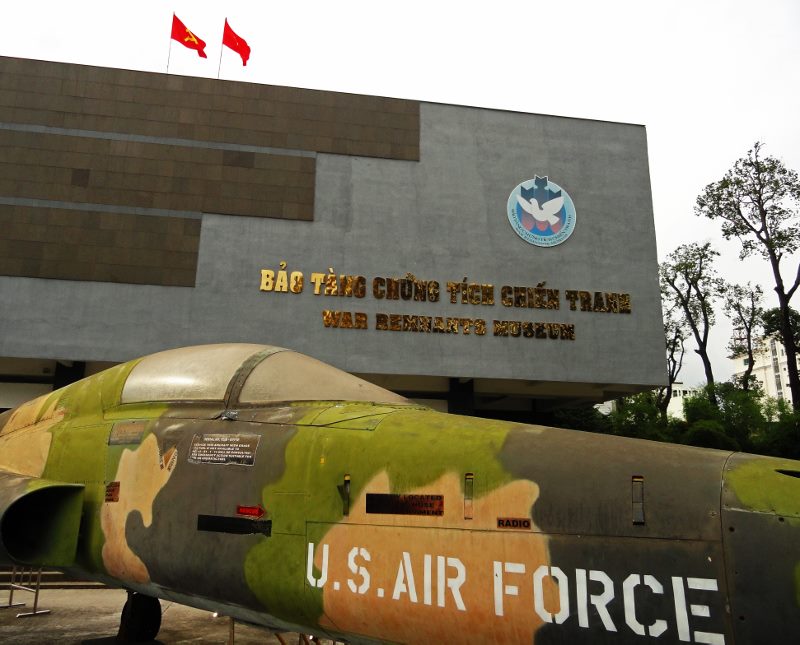 We began our travel back in time at the War Remnants Museum. The museum highlights the Vietnamese perspective of the wars against the French and the Americans. In a subtle twist it’s housed in the former U.S. Information Office, considered by many reporters to be a constant source of misinformation about the conflict.

The open-air courtyard by the main entrance is dominated by battle-scarred American helicopters, tanks and fighter planes; all seemingly poised for action. With all the familiar looking weaponry on display, it appears at first to be a U.S. military museum.

Besides the collection of abandoned military hardware outside, the museum is a sobering spot for an American to visit. One gallery is devoted to an exhibit revealing the suffering caused by the use of Agent Orange; the defoliant sprayed by American and South Vietnamese forces to deprive the Viet Cong of jungle cover in which to hide. The gallery’s walls, painted in a harsh orange color, are covered with before and after pictures showing how the chemical also destroyed farmer’s crops and coconut groves. 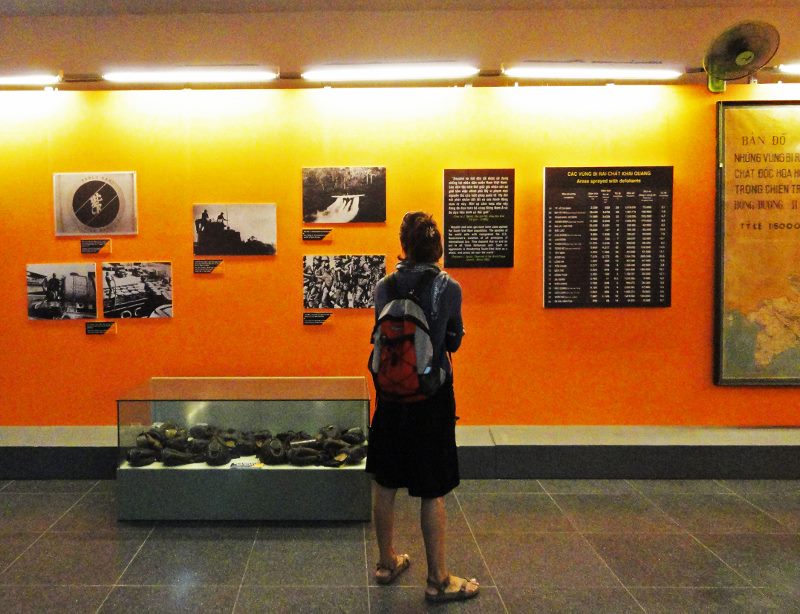 The exhibit also focuses on the impact on humans of Agent Orange; even among returning U.S. soldiers. The mood in the room is heartrending as visitors contemplate life-sized photos of families who lived downwind of the aerial spraying.

However, the museum imparts a final message of hope. A large gallery on the first floor displays the artwork of Vietnamese schoolchildren promoting world peace. Hundreds of paintings show children of all ethnicities holding hands around the globe. Some of the Western-looking kids in the pictures wear shirts emblazoned with “USA.” A display near the exit highlights Bill Clinton’s visit to Vietnam during his presidency, after the two countries opened diplomatic relations for the first time since the war. 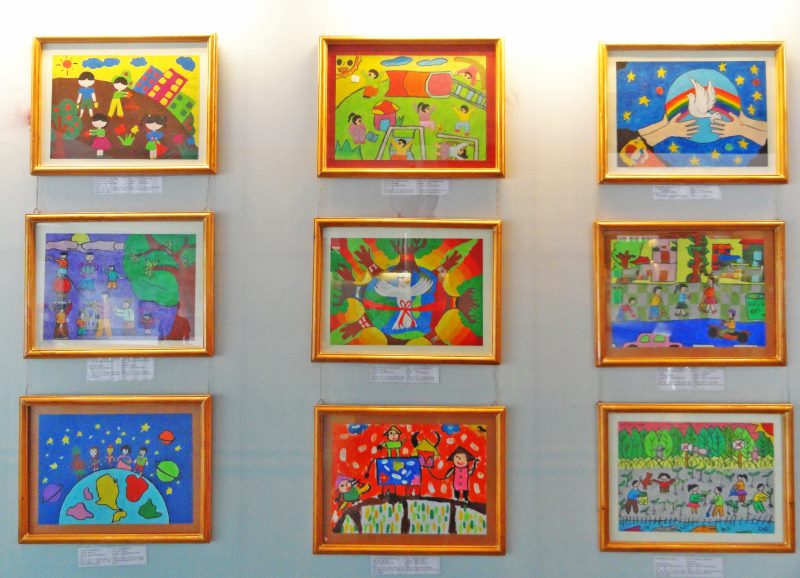 An ornate Beaux Arts style palace once housed South Vietnam’s president. After being bombed by two South Vietnamese Air Force pilots in a failed coup d’état in 1962, it was demolished and rebuilt as the renamed Independence Palace in 1966. The building has been rebranded yet again and is now called the Reunification Palace

It artfully combines modern and traditional Asian architecture. In a subtle fashion, the stone façade of the palace resembles bamboo trunks spelling out the Chinese characters representing a good future and freedom. The unchanged interior of the Palace appears to be frozen in amber; with its mid-century open-plan architecture and Modernist furnishings, it could have been lifted from the set of Mad Men. 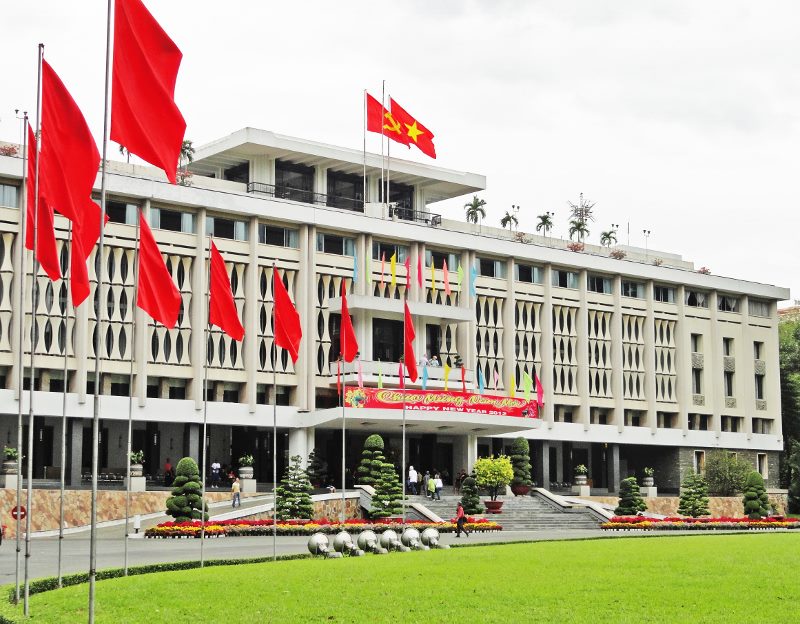 Despite its turbulent history, the cavernous interior of the Palace provides a quiet spot to reflect on the activities that occurred here. The bookshelves in the library of South Vietnam’s last leader, President Thieu, are intact; revealing a taste for novels from Arthur Hailey’s Airport to Leon Uris’ Topaz along with several years’ worth of World Tennis magazines. (Thieu was an avid tennis player.)

The structure served two functions; while it was the President’s ceremonial residence, it was also the command center used to direct military actions in the ongoing war.

We descended into the basement bunker, which still reeks of sweat and stale cigarette smoke. The President’s War Room looks like he just stepped outside for a moment to catch a breath of fresh air. Maps adorn the walls revealing the latest military movements by the opposing forces as they encircled Saigon. A twin-sized bed lays forlornly in a corner of a room the size of a prison cell; a sign above it states “The Combat Duty Bedroom of the President.” 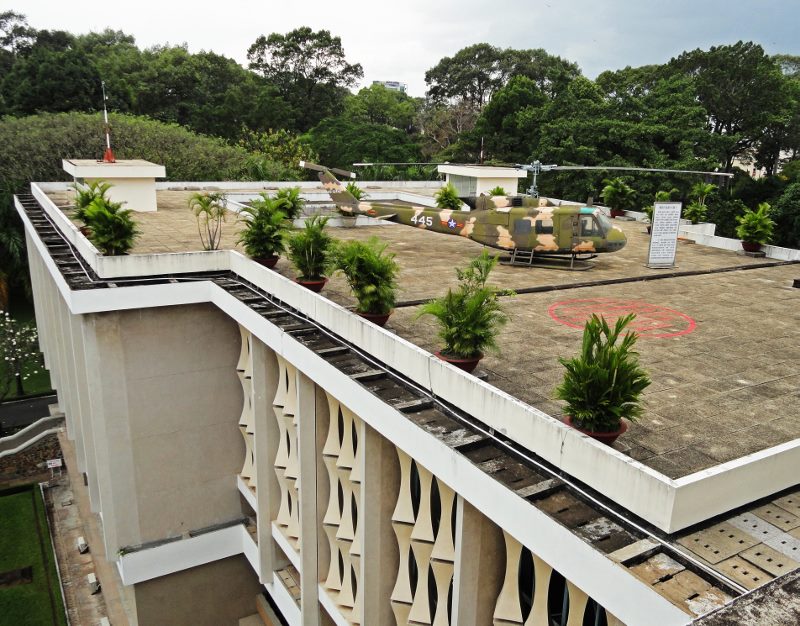 The Palace appeared in images around the world on April 30th, 1975 as North Vietnamese tanks smashed through its front gates, signaling the fall of the South Vietnamese government; while a few blocks away U.S. Army helicopters flew their final evacuation missions from the rooftop of the besieged American Embassy.

Afterwards we maneuvered our way a few blocks to the Rex Hotel, which was the informal headquarters for war correspondents. The rooftop bar was a popular gathering spot for reporters discussing the progress of the fighting and provided a safe haven from the occasional street-level grenade attacks below. It now provides an ideal setting to survey the city. 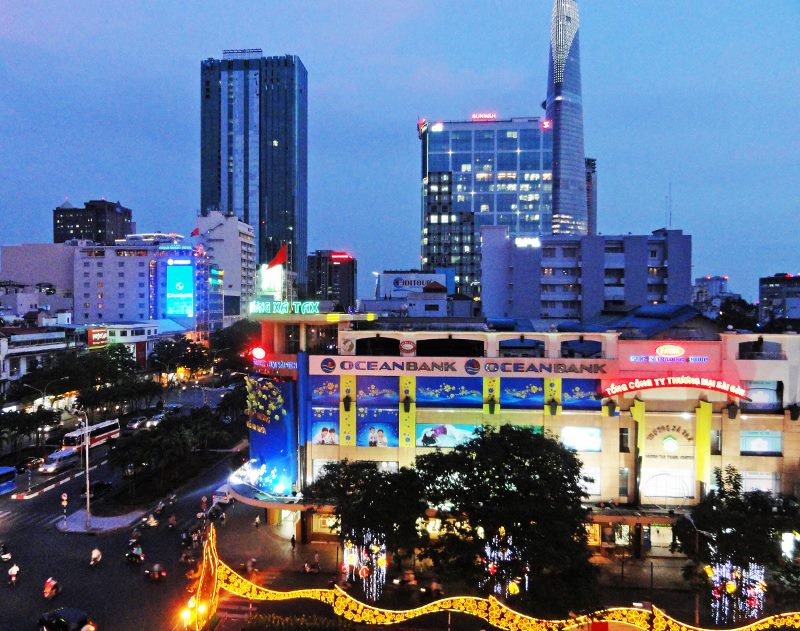 The war was fought to contain communism but now that system operates as a rough veneer over the capitalism raging beneath it. As we soaked in the scene, the Guns N’ Roses song Civil War blared over the sound system; lead singer Axl Rose screeching, “I don’t need no civil war.” Considering that the Vietnam War was the first one set to a rock-and-roll soundtrack, the song seemed highly appropriate.

Sitting nearby was an American who had served here as a platoon leader, his deployment launched in January 1968, just as the country was about to explode from the Tet offensive. He reported that during the fighting, when his platoon’s position near Danang was attacked on an almost nightly basis, he turned to his sergeant and declared, “You know in 30 years we’re going to come back here and shake their hands. Why can’t we just go ahead and do it now?” His sergeant thought that notion was absurd. But where that combat took place there’s now a championship-caliber golf course designed by Nick Faldo, serving American military veterans who return in droves.

That experience typifies Vietnam. The country has survived the rolling thunder of several wars. But now it’s just an echo, barely heard over the current economic boom, as the Vietnamese people have moved on and embraced a peaceful future.

For another story about remembering the Vietnam War read “Footprints at My Lai.”

Here’s a view of the hectic yet smoothly choreographed street scenes in a city with 2,000,000 motor scooters:

The 10 spookiest ghost towns in America 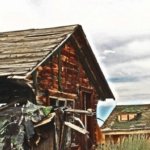 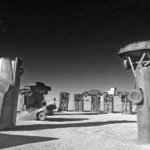