Maybe it seems unusual to visit a dusty old library on vacation. But because my dad was a dusty old librarian himself it doesn’t seem odd to me at all, particularly when it’s the Old Library at Trinity College in Dublin. Dating back to 1592 it’s the largest library in Ireland with over 3 million volumes. It’s one of the 25 best things to do in Dublin.

Pride of place is given to the Book of Kells, an illuminated gospel manuscript dating from the 9th century. (The library building itself was built between 1710 and 1732 so it’s almost a toddler in comparison.) While the Book of Kells would be justly famous for its age alone, it’s renowned for its spectacular artwork.

It was painstakingly written by a group of Columban monks around the year 800. After a Viking raid which killed many members of their community they moved inland to Kells, County Meath about 70 kilometers northwest of Dublin and continued work on the book.

The Book of Kells is displayed at the end of an exhibit titled “Turning Darkness into Light” which provides historical context for the manuscript.  The famous manuscript is actually four separate bound volumes of the four gospels. Two of the books are always on display and open to show a particularly resounding work of calligraphy. (These rotate throughout the year so you’ll see different pages if you go at different times.) 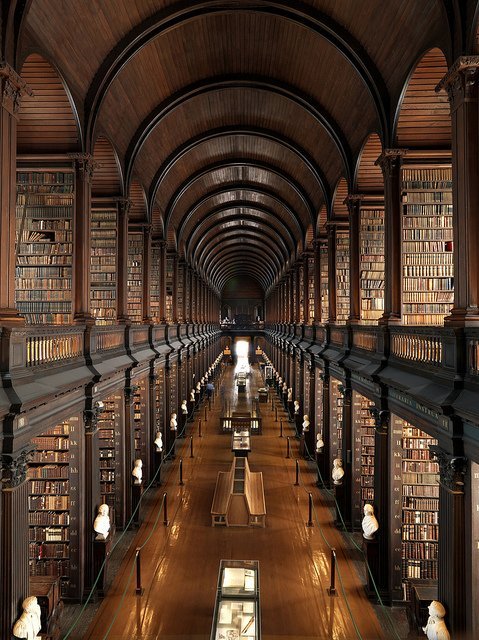 Considering how the Book of Kells is such a national treasure, if there are no large tour groups present you’ll get to spend a fair amount of time perusing the Latin scrollwork and curlicued art.

Visitors stroll along the Colonnade and the appropriately named Long Room (it’s over 65 meters long) where 48 marble busts of notable historical figures including Aristotle, Shakespeare and Irish satirist Jonathan Swift mark the way. The Long Room also holds over 200,000 of the most revered books in the collection.

Manuscripts aren’t the only thing to see though. There’s a 15th-century harp, reputed to be Ireland’s oldest, and a rare copy of the 1916 Proclamation of the Irish Republic, which was read outside the General Post Office during the Easter Rising.

Location: On the campus of Trinity College. Enter the campus at Nassau Street near Sraid Dasain Street.

Admission: You must purchase a ticket to visit the Old Library. Adults €10; students & senior Citizens €8; children under 12 free. Tickets may be purchased online.