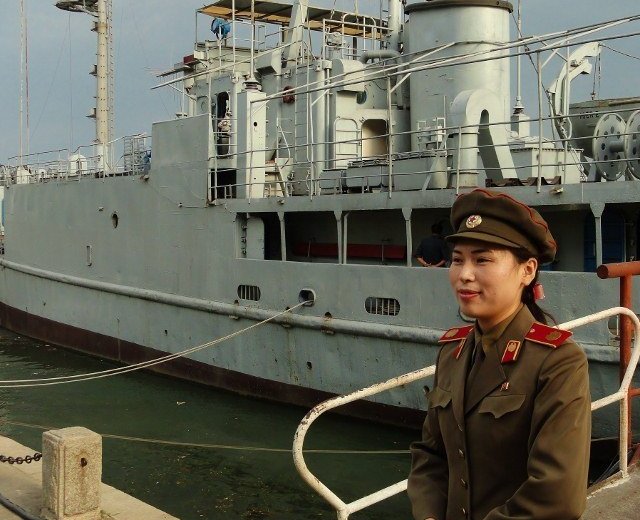 When I was a child my father spent one Saturday morning on the phone trying to find a store that sold a “Remember the Pueblo” bumper sticker.  He finally found a store that had the sticker so we all piled into the car to go get it. On the way my parents explained all the fuss about the Pueblo Incident.

The prior month, on January 23, 1968, the US Navy ship Pueblo had been captured by the North Korean navy for allegedly intruding into their territorial waters. During the capture an American sailor was killed. The remaining 82 sailors were being held hostage by the totalitarian regime of Kim Il Sung. My dad was a Coast Guard veteran and wanted to show his support for the sailors who were in captivity.

Just as the agreement to end the Korean War dragged on, the US sailors were not released until December 23rd of that year. This occurred only after the sailors and their commanding officer, Lloyd “Pete” Bucher, were subjected to enough torture to make false confessions and the United States issued an apology for trespassing on North Korea. Upon their release the State Department was able to confirm with Commander Bucher that the ship had not violated North Korea’s waters and immediately rescinded the apology. 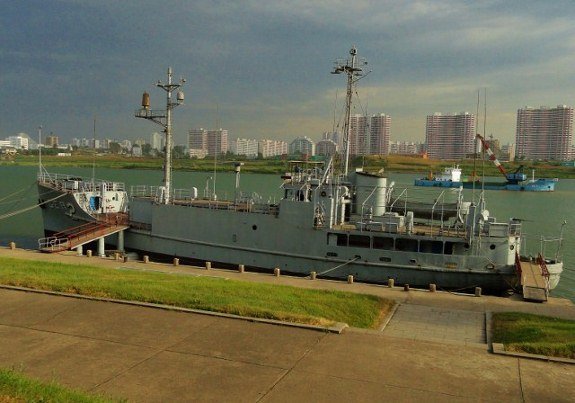 The ship was never returned and today it floats on the Taedong river in the center of Pyongyang; the only commissioned U.S. Navy ship in foreign hands. The North Koreans are very proud of the trophy that they wrested from the “Imperialist Americans” and it is required viewing on a tour of the capital city.

I had personal reasons for wanting to visit the ship. As a child I had been fascinated by the whole affair. It was the first time I had become aware of and intrigued by an event concerning international relations and diplomacy. Did I mention that I was seven at the time? Several years later, when I was a teenager, I wrote to Commander Bucher about the incident. He responded with a long handwritten letter about life in captivity and made comparisons to another major item then in the news, the Iranian hostage crisis.

As we approached the ship the first thing that struck me was how small it is. I couldn’t imagine bouncing around the frigid waters of the Sea of Japan in it. The ship was a World War II-era freighter that had been hastily converted for its current mission. 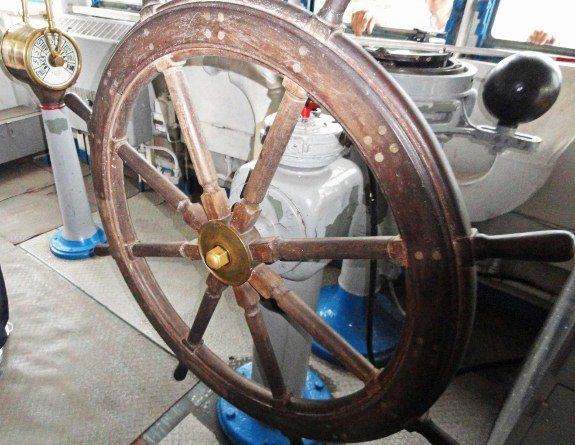 The Captain’s wheel on the bridge

It was lightly armed with two .50 caliber machine guns. During the incident they were wrapped in canvas which had frozen solid, rendering them unusable. It wouldn’t have mattered since the North Koreans threatened the Pueblo with two gunboats, three torpedo boats and a pair of MiG fighter planes circling overhead. At the point that the North Koreans starting strafing the ship, killing one sailor, Commander Bucher finally gave in and surrendered.

By all credible accounts that’s what happened that day on the high seas. The story we heard was a bit different. Our group was herded into the crew’s mess where we watched a 15-minute propaganda video of the North Korean interpretation of the events. This consisted mostly of harangues against America and really grainy footage of Lyndon Johnson looking demonic. What the video lacked in facts it made up for in rage and indignation.

Next we toured the room where the intelligence gathering equipment was held. Since the attack was so sudden most of it remained intact as the crew had little time to destroy the cryptographic machines and classified documents. 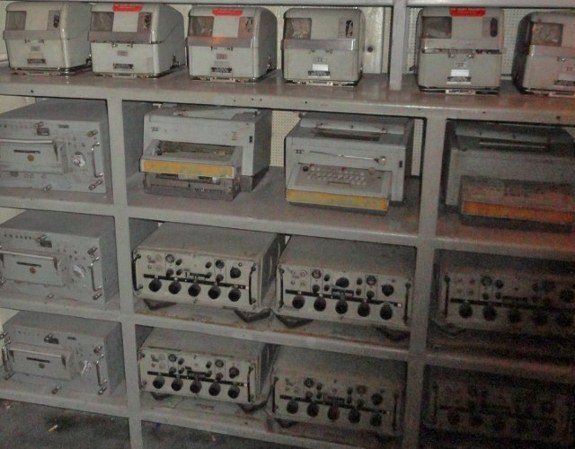 We went up on deck where the guide led us through the North Korean interpretation of events. Apparently the mighty Pueblo was captured by a mere eight North Korean soldiers who found the captain quivering under a table. No mention was made of the overwhelming amount of arms that the North Koreans brought to bear on the Pueblo. We almost got the impression that the eight soldiers had swum out to the ship in the freezing waters, hoisted themselves overboard under withering gunfire and then captured it as the Americans all cowered in fear.

We had been warned before the trip that we were not to point out to the hosts that their interpretation of historical events was different from ours. If we did the tour would come to an abrupt end and, besides, we weren’t going to convince them anyway. The “facts” as they knew them had been drilled into them for years; since birth really.

One member of our group, Jeff, had a finely honed knack for asking questions in such a subtle way that showed he wasn’t buying it. He asked innocently, “How did only eight soldiers capture eighty-three Americans?” The guide responded in all sincerity, “They were very brave.” This was a theme we were to hear often during the week.

One of the sad things that the tour of the Pueblo revealed was how much the North Koreans are still clinging to the past. The incident looms large in the country’s history and is put forth as yet another example of the superiority of their political system.

There was a time when “Remember the Pueblo” became a rallying cry in the United States. Today I would wager that less than 95% of Americans who were born after the Pueblo incident even know about it; but the citizens of North Korea have this minor skirmish that occurred over forty years ago drilled into them constantly. Until they focus more on the future, things will never change in North Korea.  It certainly makes for fascinating–albeit exasperating–touring.

For more about our visit to North Korea click here. 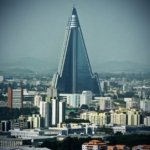 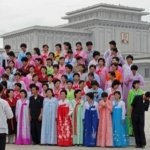 Is it morally right to visit North Korea?
Scroll to top