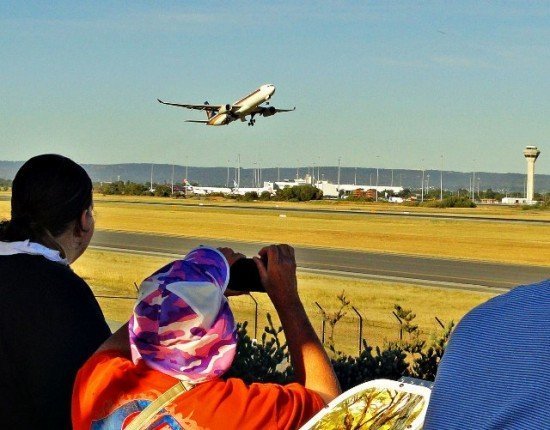 The shiny new Emirates 777-200LR was zooming down the runway right  towards us, its General Electric engines screaming to create 110,000  pounds of  take-off thrust. Along with dozens of other plane geeks we were leaning over the railing like kids at a petting zoo at the new Perth Airport runway viewing area. Fortunately for us it had just opened the day before.

If you ever drive around the periphery of an airport you’ll notice a mass of mostly middle-aged, mostly men sitting at the end of the runway in beach chairs. Every few minutes they turn as one and point their cameras upwards into the sky. These are plane spotters, people who track and take photos of planes at airports. Their goal is to find as many different types of planes as they can and upload the pics to web sites that specialize in this arcane subject. We certainly saw more than our fair share when visiting the Tucson Airplane Graveyard in Arizona.

We met one such aircraft spotter at the new viewing area. Jens, a Dane who had flown in from South Africa, ostensibly to visit family living in Perth. But one look at his t-shirt, emblazoned with the logo of a Danish plane spotting web site, the way his head swiveled like a puppy in a sausage factory whenever he heard another jet roaring down the runway, and the massive zoom lens attached to his camera, made us think that visiting family was just an excuse to see the newly opened viewing area. 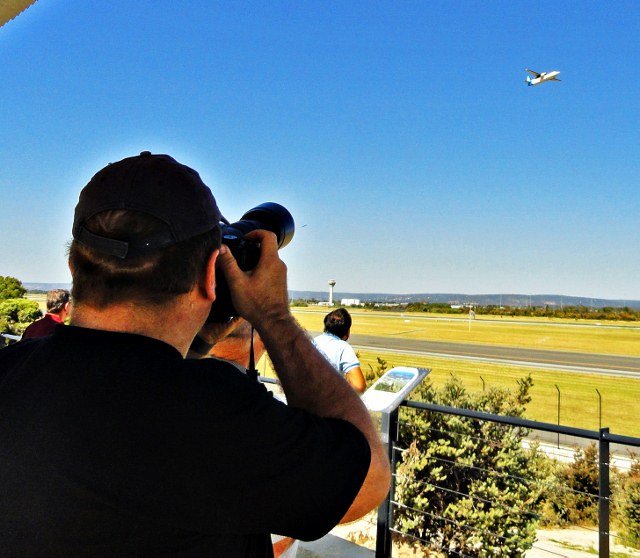 Aircraft spotter Jens captures another one

But not all plane spotters are so hardcore. Like most avid travelers, we happen to be plane geeks ourselves but are content to just watch the planes without recording them for posterity. Like many airplane geeks though, as much fun as it is to watch the planes take-off, we wish we were on one instead.

Here’s a video of a plane taking off from Gibraltar International Airport, one of the 10 most unusual airports in the world.

If you’re into airplanes you might like this story about our biplane ride in New Zealand over the Lord of the Rings sites.

Wings over Lord of the Rings 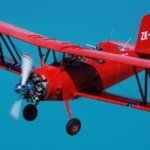 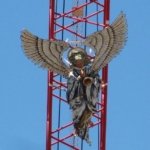