Communist governments feel compelled to preserve the corpses of their founders and keep them on display for public viewing. It’s their way of sustaining the cult of personality that keeps the current regimes in place. In the past few months we hit the trifecta of embalmed communist Asian leaders: Ho Chi Minh, Mao Tse-tung and Kim Il-Sung. 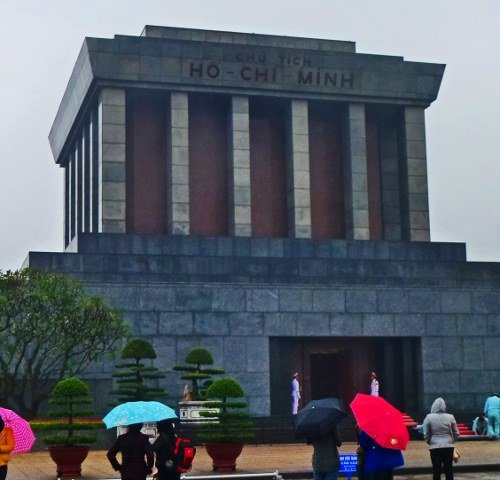 Ho Chi Minh, the man whose efforts eventually unified Vietnam, was apparently a simple man. He requested to be cremated and have his ashes spread over north and south Vietnam. However his successors ignored his request, resulting in a foreboding Stalinist pile that goes against his wishes.

Due to its heavy-handed architectural style, the mausoleum actually appears larger in photos than in person where it’s easier to determine its scale. Army honor guards wearing white dress uniforms surround the entrance. They appear to be selected based on height because they were all taller than Michael, a rarity in Vietnam.

The chamber housing Ho is fairly austere; the only decorations are two large reddish floor-to-ceiling marble panels behind him, one decorated by a yellow hammer-and-sickle and the other the gold star of the Vietnam flag. The body is remarkably well-preserved, even down to Ho’s signature wispy beard. As we gaped at his body lying under the exposed glare of spotlights we couldn’t help thinking that this was the exact opposite of what he requested.

We were in and out in less than a minute and on to the rest of the complex, which includes his small house built on stilts and the requisite Presidential automobiles. 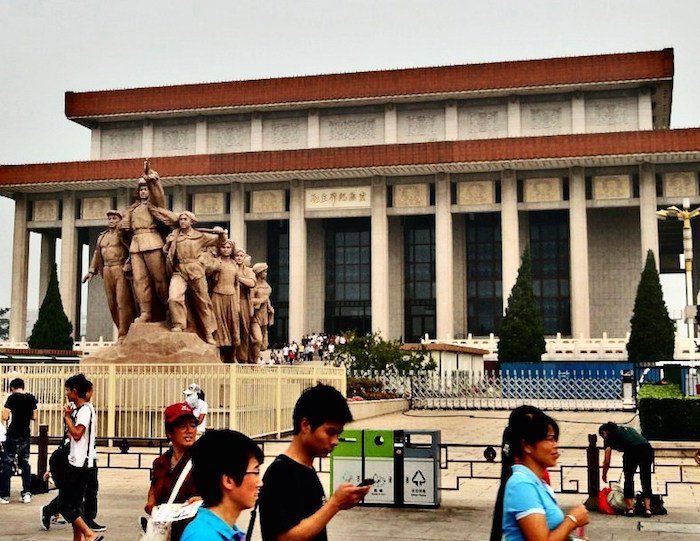 The line to visit Chairman Mao wraps around Tiananmen Square but moves quickly and is well organized, one of the few places in Beijing where people queue in an orderly fashion. Mao’s tomb is strikingly similar to the Lincoln Memorial in Washington, DC, right down to the seated larger-than-life statue of him staring benevolently down on the masses teeming by.

We filed quietly past the raised casket. His body is covered by a large Communist flag leaving only his waxen face visible. We could easily have been viewing a likeness of Chairman Mao made by an artist surreptitiously hired away from Madame Tussauds Wax Museum.  We were in the room with Mao for about twenty seconds and then shunted on.

Outside the mausoleum vendors sell trinkets bearing Mao’s image. For a system that renounces religion, they have an amazing capability of suborning such symbols to glorify their own leaders. The baubles for sale included  gilded images, similar to religious icons, that the faithful could hang on their walls. It reminded us of the shrine-like gifts for sale upon leaving the Vatican.

The “Greatest” of them all: Kim Il Sung 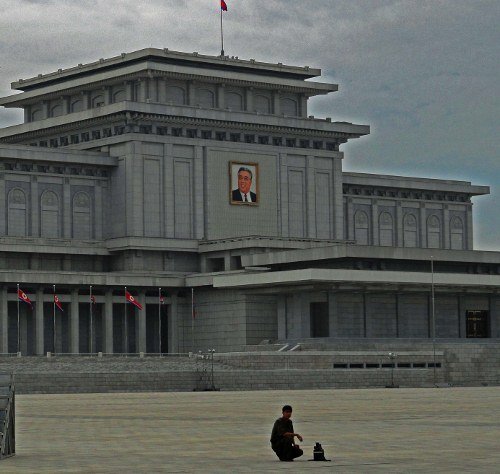 The mausoleum housing Kim Il Sung, forever known as The Great Leader, is a massive marble building that is all out of proportion to the tiny country. It overlooks a vast windswept square that is large enough to hold military parades or possibly land a small jet. In a country of such wretched poverty the contrast is astonishing.

We waited outside the entrance next to two lines of North Koreans from the countryside. The women were mostly under five feet tall, partly a product of heredity and likely a product of malnourishment. They wore the choson-ot , the traditional dress brought out for special occasions. For them it was the trip of a lifetime, probably the only time they would pay their respects to Kim Il Sung. For us it was just another stop on a tour. 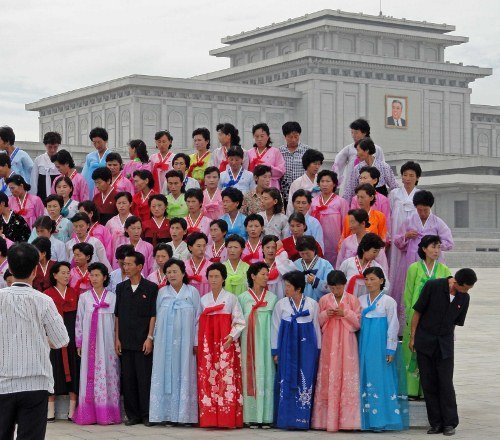 In one room large bronze bas-relief murals depicted people of various races in agony: African farmers in their fields crying, Asian factory workers doubled over in pain. We were given headsets with an English language description of Kim Il-Sung’s death. The hyperbolic announcer, who sounded like a Korean Alistair Cooke hepped up on meth intoned, “All over the world, people beat their breasts in agony over the loss of the Great Leader!!!”

Before entering the viewing area we walked across a contraption with rollers that cleaned the bottoms of our shoes. Then we entered another vestibule and went through an airlock type device; cold air was blasted at us from high-speed blowers to remove any stray particles of dust. The women in dresses looked like they were replicating Marilyn Monroe’s famous stop over the subway vent in The Seven Year Itch.

Suitably cleansed we finally entered the room where the Great Leader lay in repose. We marched around the body in groups of four, with a curt bow required at the feet and two sides of the casket.

We then entered a museum honoring Kim Il Sung. Along the walls, in a literal rogue’s gallery, hang large framed pictures of him shaking hands with notorious world leaders; some of whom, Hosni Mubarek and Muammar Gadhafi, had only recently been deposed by their own people. It makes one wonder what fate awaits the current leader of the DPRK.

It struck us that the North Korean leader presided over the smallest of the three countries in Asia with embalmed leaders but had the gaudiest display devoted to him. It makes sense though. China and Vietnam are moving forward on a business-oriented track that engages the world, while North Korea is still mired in an isolated cult of personality to keep its current citizens in their place.

Other than the overblown architecture designed to make the common man feel, well, common, you will notice another similarity in these photos, they’re not very clear. This is the result of the horrible air pollution in Beijing, Hanoi and Pyongyang. Just another thing that totalitarian regimes unconcerned about their citizens can get away with.

Click the link to view more about our visit to North Korea.

Have you visited any of these sights?

Pictures from the frenetic streets of Hanoi 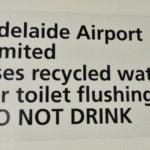 Don’t drink from the toilet!—and other odd signs around the wor...
Scroll to top