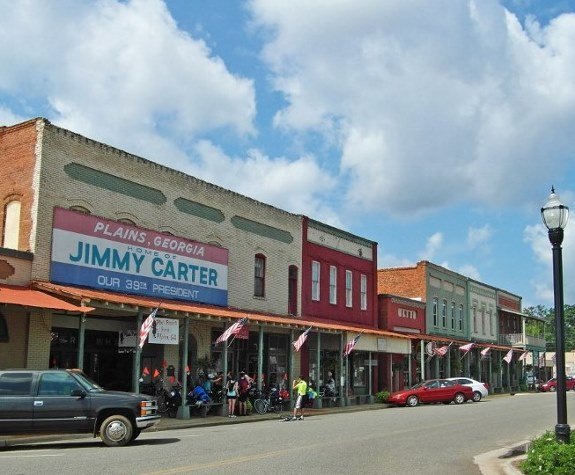 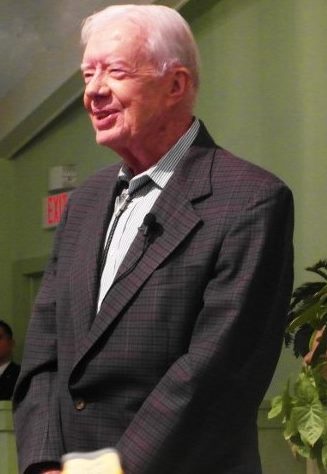 The piercing blue eyes which compelled Menachem Begin and Anwar Sadat to sign the Camp David Accords were only five feet away from me and staring keenly into mine. Their owner had just asked me where I was from and, for a moment, I was speechless answering this simple request. Such is life when meeting former president Jimmy Carter. At 88-years-old he’s a bit more slight than I remember but still boasts the commanding presence of a world leader and Annapolis graduate.

Despite once being the most powerful person in the world, he and First Lady Rosalynn are down-to-earth globetrotters building homes for Habitat for Humanity, monitoring elections and fighting disease in developing nations through the Carter Center and winning the Nobel Peace Prize. Yet he still keeps a regular appointment teaching Bible studies at the Marantha Baptist Church in his boyhood home of Plains, Georgia.

Jimmy Carter teaches Sunday school prior to the main service. Afterwards, under the vigilant watch of a Secret Service detail, he and Rosalynn pose for photos with churchgoers basking in the glow of history. No tickets are required for this unique opportunity to witness and hear the thoughts of an American president up close. 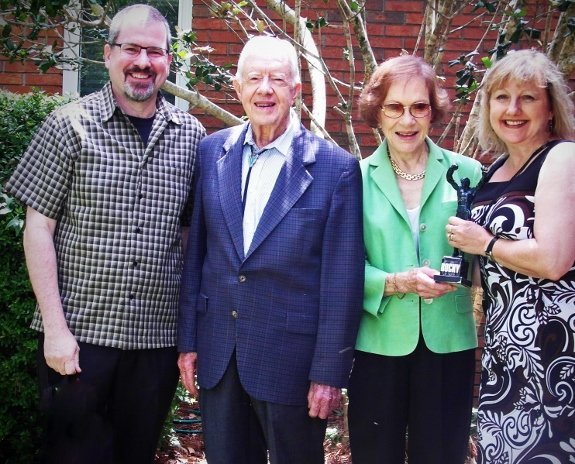 The Carters were kind enough to pose with the Rocky statue after the service.

While the lesson is a highlight of a trip to Plains, it is not the only activity. The town now hosts the Jimmy Carter National Historic Site which encompasses the turn-of-the-last-century Main Street, Carter’s boyhood home and farm, the model railroad-sized wooden train depot he used as his campaign headquarters for both presidential runs, and a museum dedicated to his life in the old Plains High School which he, Rosalynn and their three sons attended.

For the full Plains experience it’s best to stay right on Main Street at the Plains Historic Inn. The seven rooms are each decorated to match a decade of Carter’s life; from the room filled with furnishings from the 1920s to mark the decade of his birth to the 1980s room marking his return to Plains. Mrs. Carter helped select the antiques for each room while her occasional carpenter husband pitched in building walls and refinishing the wooden stairs. 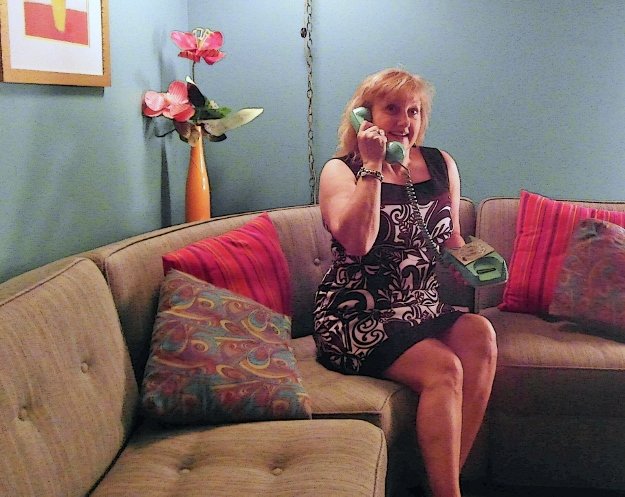 With its 7-inch black-and-white screen nestled in a large slab of blonde-wood furniture, it wouldn’t have been surprising if the authentic TV in the 1950s room blared an episode of I Love Lucy out of the tweed-covered speaker. For those with higher aspirations, the 1970s room with its formal furniture and vibe could have been cribbed right from the private quarters of the White House.

“Miss Jan” the innkeeper is a friend of the Carters. She revealed, “My husband’s known him his whole life.” Just about everyone in this close-knit farming town of 685 people claims such a connection. 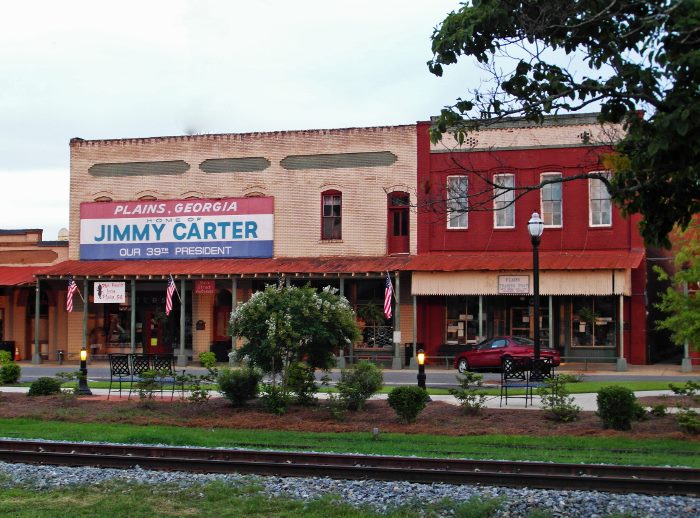 Only a block long, the well-preserved Main Street resembles a movie set. Most of the businesses, including a well-stocked antiques mall, political memorabilia shop and snack bar, cater to tourists. Since Carter was the country’s most famous peanut farmer before his 1976 victory, the shops continue with that nutty flavor.

Try Plain Peanuts at 128 Main Street for all things peanut including homemade peanut ice cream, peanut fudge and boiled peanuts, a Southern delicacy that you must try at least once; but make sure they’re served warm. You can’t miss the shop since it’s located in the former Carter peanut warehouse that is now emblazoned with the famous 10-foot-high red-white-and-blue striped sign that proudly proclaims Plains, Georgia as the home of “Our 39th President.” 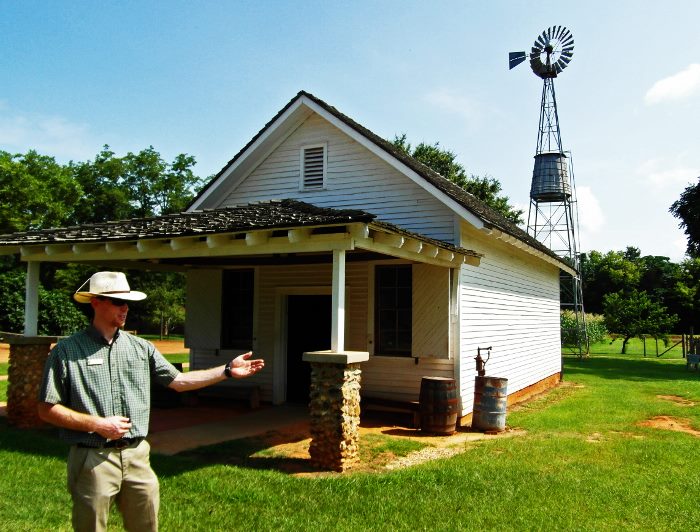 Carter’s boyhood home and farm is a 2.5 mile drive out of town. It’s been restored by the National Park Service to its appearance when the future president lived there. A park ranger at the entrance was boiling up some peanuts in a crusty iron pot suspended over burning wood to prepare boiled peanuts for visitors. We each accepted a bag and sat on old wooden rockers in the screened-in front porch to munch on our snack.

The view from the porch is unchanged since the 1920s so this brief respite from the heat felt like a ride in a time capsule to a simpler era. The bright orange clay that nourishes the peanuts blends land and sky at sunset into a fiery tableau. Mr. Carter lives just up the road and occasionally rides his bike over to the sight, surprising visitors whom he regales with stories of his upbringing, while underscoring the unique opportunity to visit a National Park devoted to a living president who still resides in the area. 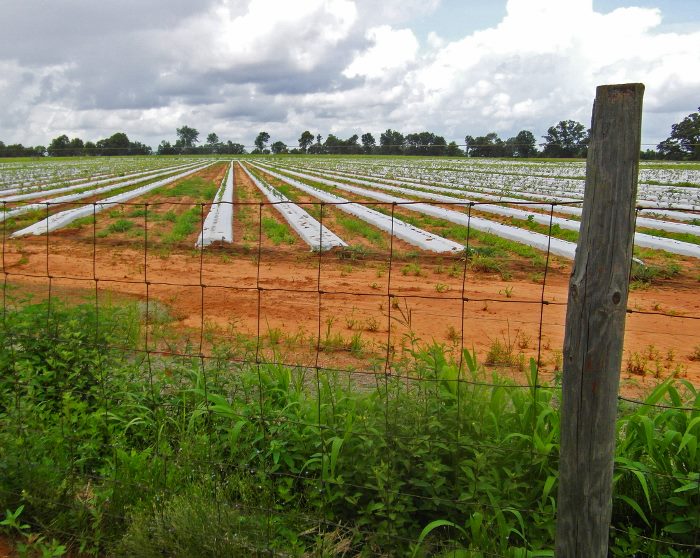 Back at the church I finally managed to blurt out “Pennsylvania” in response to Mr. Carter’s request for my home state as he continued to work the room. Satisfied that he knew where everyone in attendance was from, Mr. Carter began his lesson on the day’s theme, which was discovering how to pray. He interspersed passages from the Bible with side trips visiting topics ranging from the Iranian hostage crisis to the current kerfuffle about the NSA monitoring the phone calls of ordinary Americans. Somehow he managed to seamlessly weave a theology lesson with his thoughts about world events and political history. 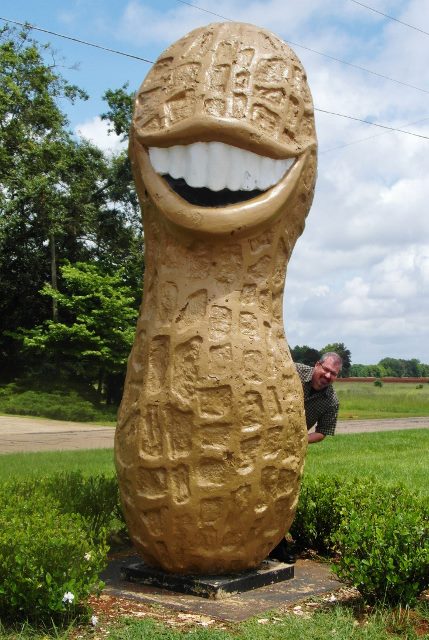 Mr. Carter also tied in stories from his youth recalling, “the two or three sweethearts I had, well, you don’t need to hear about that. That was before I met the love of my life, Rosalynn” he chuckled, while flashing his famous toothy grin. It is clear that faith has always been very important to Jimmy Carter. So important that a man with one of the busiest schedules on Earth still takes time to teach Sunday school at his local church. Just make sure you remember where you’re from when he asks you.

If you’d like to stay in town when President Carter is speaking, book a room at least a month in advance at the Plains Historic Inn & Antiques: http://www.plainsinn.net/ Other options for lodging are in nearby Americus. 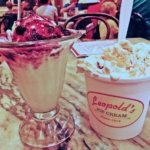