Alaska is a popular spot for cruise vacations. However most of the visitors who take an Alaska cruise only skirt the shoreline of America’s largest state.  Visitors preparing to board or disembark from a cruise nearby should realize there are many reasons to visit Anchorage and immerse themselves in the unique Alaskan culture. If you’re considering a road trip, Anchorage makes a great start/end point for the perfect 10-day Alaska itinerary.

We used Anchorage as a base for a flightseeing expedition to a glacier. As we climbed gingerly down onto the narrow float of the seaplane which we had just ridden in for a soft landing on Lake George, it was hard to believe we were only 45 miles northeast of downtown Anchorage. Just off to our right was the soaring Colony Glacier, its craggy azure surface providing a launch pad for polar winds blowing out to greet us. 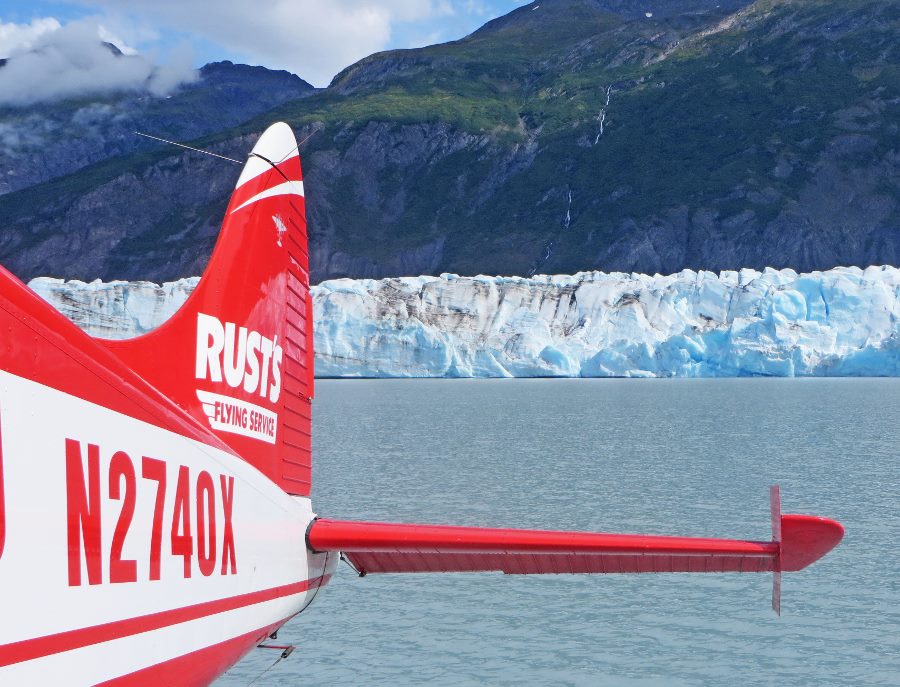 As we balanced on the float the sound of gunshots echoed throughout the valley. At least that’s what we thought they were, until we watched Humvee-sized blocks of ice calving off the glacier and landing spectacularly in the lake, launching giant plumes of water into the air. It was just another day in Alaska, the vaunted “Last Frontier” which more than lives up to, and exceeds, its reputation for pristine rugged beauty. 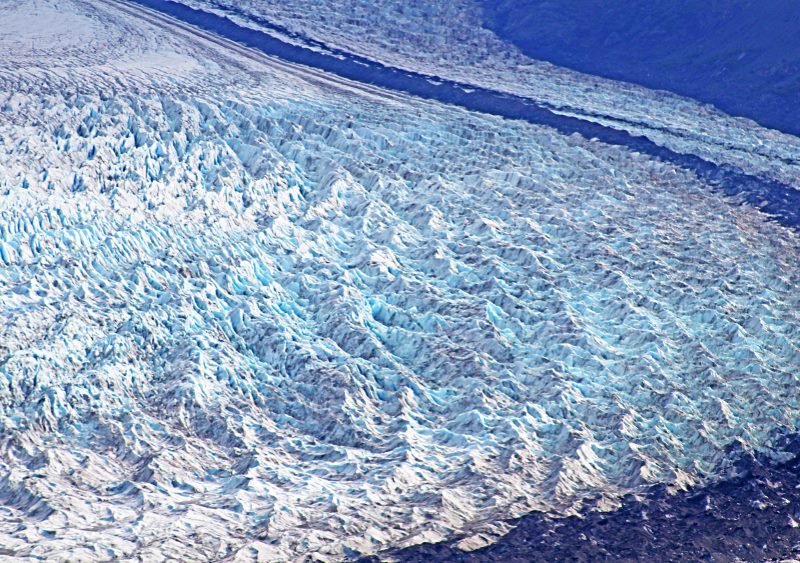 Endless summer in the city

Summertime in Alaska is particularly enchanting. Long hours of daylight give plenty of time to explore and all that solar warmth encourages flowers to bloom in colorful profusion. In a sharp contrast to winter, Anchorage overflows with flower beds and planters in a rainbow of hues while hemlock trees are festooned with thumb-sized deep purple pine cones, as if they had been decorated for an early Christmas.

Culturally Anchorage ranks up there with metropolises boasting larger populations. A good place to start is at the Anchorage Museum, which displays over 600 indigenous artifacts in the Smithsonian Arctic Studies Center. It’s remarkable how many delicate pieces have survived including intricately beaded satchels, carved walrus ivory bows and the ahead-of-its-time pearly white imarnin or “gut” parkas. These translucent gems were sewn by members of the Yup’ik tribe from sea mammal intestines to provide a clever form of waterproof protection. 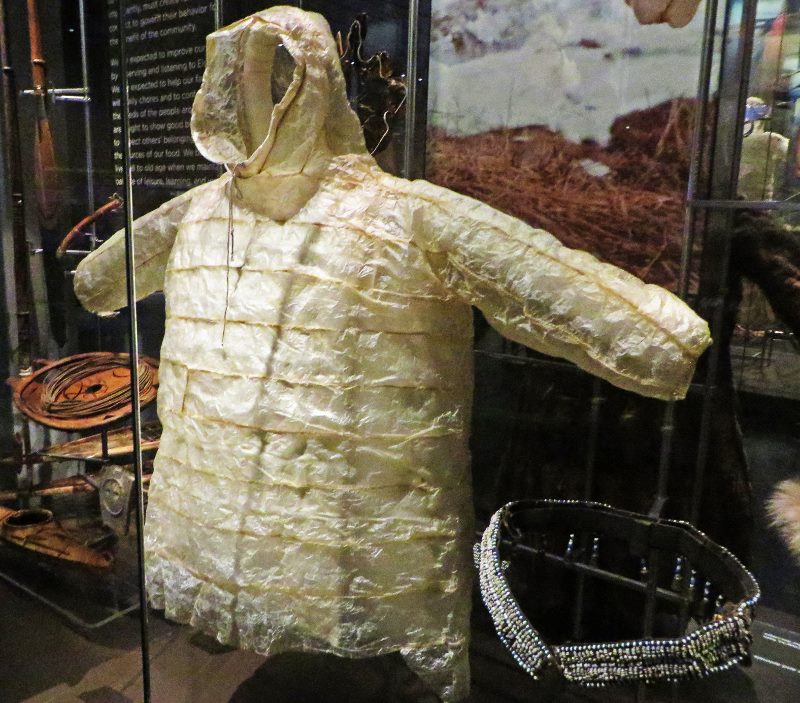 Given its remote location, Alaskans were locavores before that concept became the latest foodie trend. In addition to local Alaskan favorites such as king crab, salmon and reindeer sausage, the city is home to a growing international foodie scene. Anchorage is also tapping into a burgeoning microbrewery movement. For true local flavors–of both the culinary and people- watching variety–try Humpy’s Great Alaskan Alehouse for live music, the state’s largest selection of local beers on tap and an Original Crab Roll (Alaska’s answer to New England’s lobster roll).

Sorry Rudolph, we try the best reindeer dogs in Anchorage 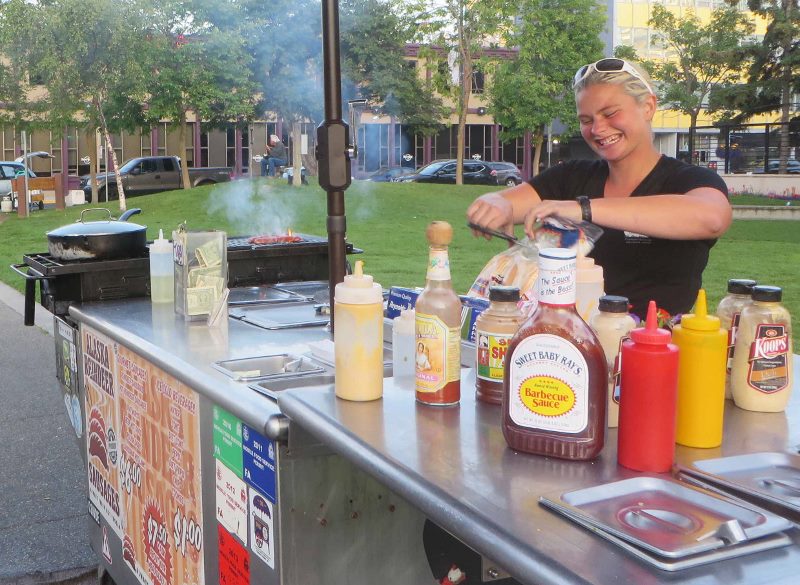 If you’re still hungry head over a few blocks to Town Square Park on West 5th Avenue. Follow the smoky aromas where three food carts duke it out for reindeer sausage supremacy. Each has their own secret sauce and methods to prepare these local delicacies. Husky Dogs sautés their onions in Coca-Cola to give them a sweet, spicy flavor. The sausage and onions are delicious and don’t worry, if you’re traveling with children who can’t stand the thought of eating Rudolph’s brethren, the vendors will refer to it as caribou sausage. Around 10 p.m., with the summer sun still casting its amber glow across the park, is the perfect time for a taste. 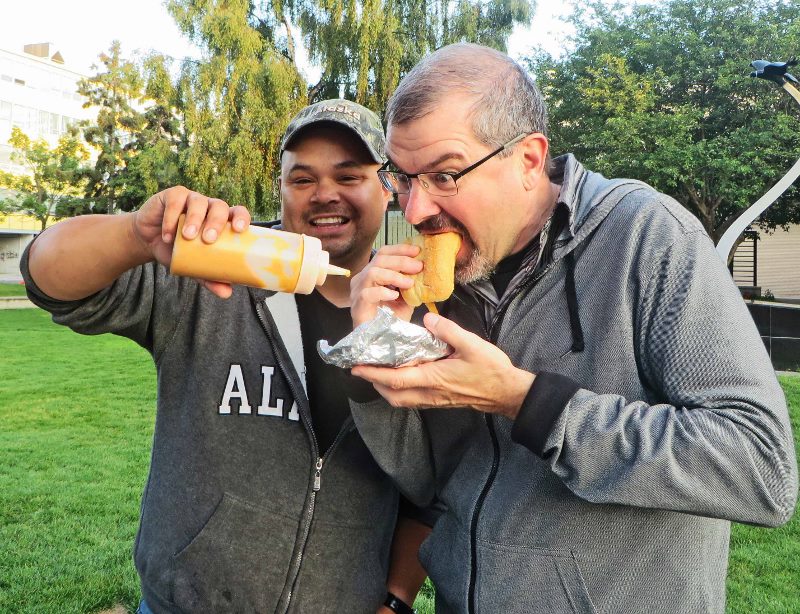 Anchorage is an outdoors town year-round, but in summer it really shines. An easy way to experience its relationship with nature is via the 11 mile long Tony Knowles Coastal Trail that runs from the train depot downtown out beyond the airport.  Don’t worry about the length, it’s all flat and paved. You can just take on part of it or even rent bikes at bike rental outfits along the way. If you’re practicing your inner Greg LeMond watch out for the occasional moose strutting across the path. It’s also not unusual to spot a few bald eagles.

Back on Lake George we climbed carefully into the plane. After battening down the hatches and making sure we were all accounted for, our pilot Scott from Rust’s Flying Service serpentined his way through the icebergs drifting by and gently lifted off. 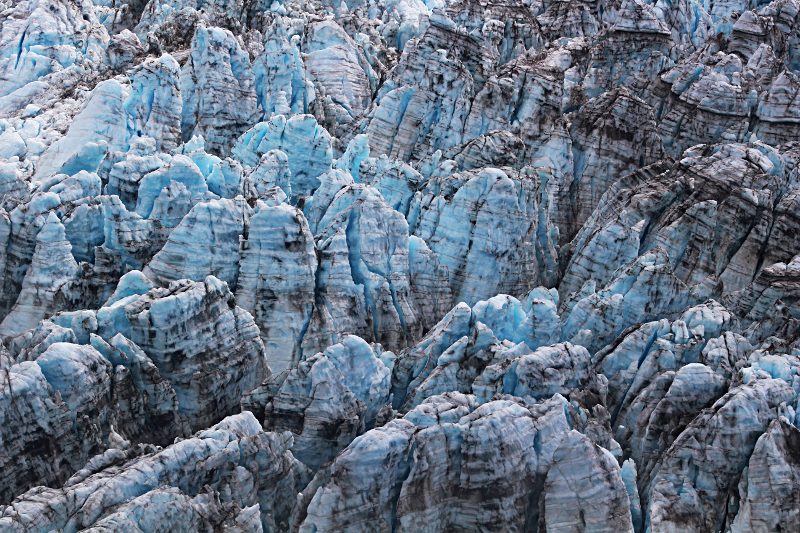 On the way back to Anchorage we flirted with the Chugach Mountains for an aerial wild game safari. On the steep rocky hillsides, snow white Dall sheep sporting prominent curved horns stood out against the summer vegetation, while down below moose cavorted in the boreal forest. In less than a half hour we were back in Anchorage, splashing down at the Lake Hood Seaplane Base, which is the busiest in the world. It’s also a convenient starting point for flightseeing trips to Mount McKinley and Denali National Park. 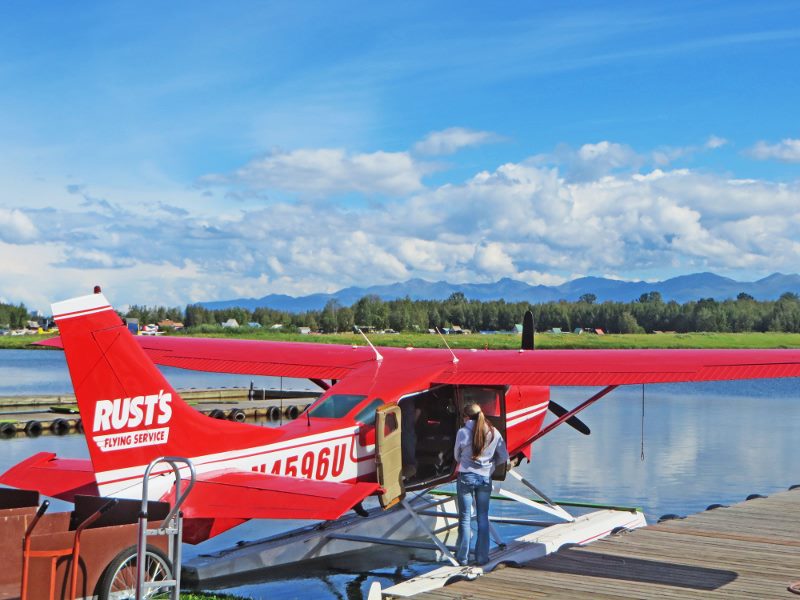 When Anchorage started out in 1915 as a construction camp for the new railroad it was just a tent city. A century later it’s a metropolis of 300,000 hardy souls with a thriving cultural life set amidst some of the world’s most spectacular scenery. There are so many reasons to visit Anchorage, it’s definitely worth more time than a transit point on a cruise.

Anchorage’s Town Square Park on West 5th Avenue is a festive place. Particularly during the summer when the waning orange glow of the sun at 11 pm sort of makes it feel like sunrise. Which got me in the mood for breakfast, or was it the dueling smoke wafting my way from the three reindeer sausage vendors that set up camp on the sidewalk?

When I first heard about this local delicacy visions of Rudolph danced in my head. Would Santa put me on his naughty list? As someone who was raised in New York all I knew about reindeer was from Christmas stories. Once I found out (spoiler alert) that Santa Claus wasn’t real (end spoiler alert) I just assumed that reindeer weren’t either. I didn’t find out they actually existed until I saw a National Geographic show about them years ago.

Trying reindeer sausage in Alaska had not been high on my list of things to do. But as I inspected each of the vendors grilling the sausage, heard the crisp snap of the fat sizzling on the griddle and smelled the unquenchable aroma I just had to try one. I sought out Husky Dogs where the perky and upbeat Anna was cooking up a few links under the big red umbrella. The owner of the stand, Martin Boss, was busy stocking up the supplies. Martin operates the stand during the summer when he is not in Georgia with his other gig: he works as a film editor on the hit TV show The Walking Dead.

He is proud of his reindeer sausage, emphasizing that it is fresh, never frozen. What really makes his reindeer sausage stand out is the grilled onions placed on top. They are caramelized in Coke every 10-15 minutes and really add a sweet touch. The final piece of the puzzle is their housemade “Boss” sauce, a blend of stone-ground mustard, pepper extract and vinegar. It really packs a zing.

Martin (left) normally deals with zombies which made it easier to work with Michael.

The result? Delicious. I’m not sure I would know that the sausage was made from reindeer as opposed to some other animal but at that point I didn’t care. I just knew that it was crispy, spicy and full of meaty flavor. At 11 PM on a summer night in Anchorage, reindeer sausage really hit the spot.

I hope Santa will understand.

Tasting reindeer sausage is just one of many reasons to visit Anchorage, whether you’re traveling by land or sea. If traveling by cruise ship, check out some of the best cruise excursions in Alaska at other ports as well. It’s these shore-based experiences that make a trip special.