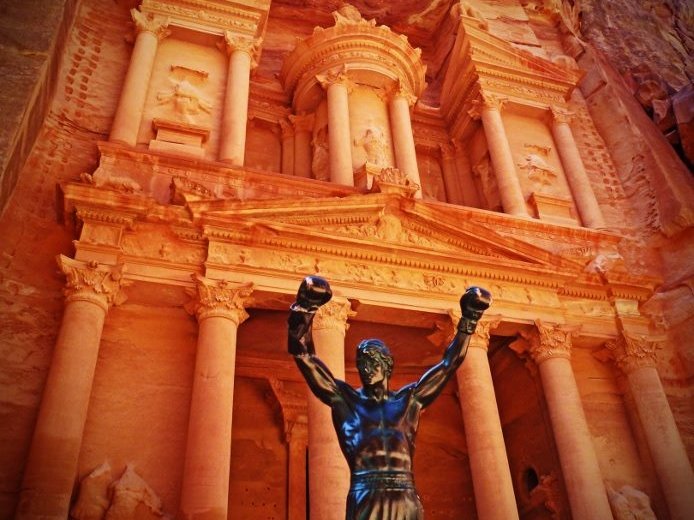 We knew the night would be a little different than expected when at check-in Mahmoud cheerfully informed us, “I’ve upgraded you to a cave.” That was our introduction to staying at a Bedouin camp on our visit to Jordan. We had visions of dusty tents covered with Persian rugs and the odd camel lumbering by. This was true enough, but we were directed to our cave, a hole in the wall (literally) that barely had room for a floor mat with enough striped pillows to fill a Martha Stewart home furnishings catalog. After Mahmoud told us he had been raised in this cave we gladly accepted his generous offer. 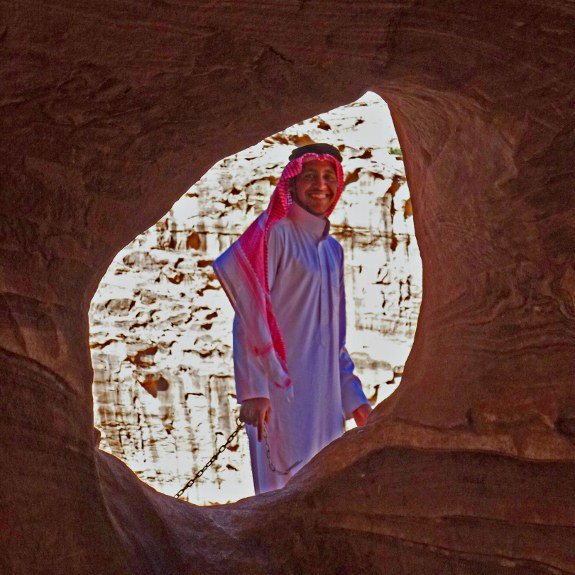 We were staying near Little Petra, only a few miles away from the world-renowned site of Petra. But apparently that short distance is an impassable obstacle to thousands of tourists every year. While Petra is jammed with visitors, many of them day-trippers traveling in huge packs from southern Israel, its former suburb of Little Petra can usually be seen in total silence. Our goal was to see both and compare. 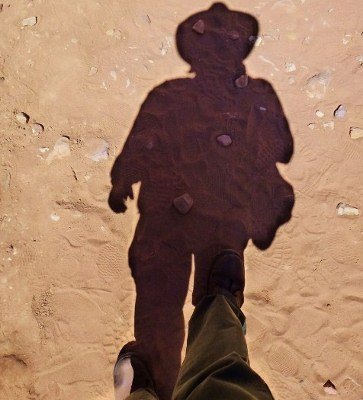 Although it has been quietly lurking in a remote mountain pass for millennia, Petra’s most recent rediscovery occurred when Steven Spielberg selected it as the site for the climactic scene in Indiana Jones and the Last Crusade. Picture Harrison Ford and Sean Connery riding their horses through a narrow passageway and encountering the ancient pink-sandstone Treasury Building, with its Corinthian columns and pediment, carved into the rock. Moviegoers around the world were astonished that it wasn’t a movie set but a real place they could visit. Tourism took off, making Petra one of the most popular attractions in the world.

Petra began in the Neolithic Period, but really came into its own as a rich trading post in the 1st century B.C.. By the 6th century, a massive earthquake destroyed much of the city and it was abandoned, though local Bedouin continued to live in the area as they still do today.

To break away from the crowds at Petra it is necessary to take a big step, or in this case about 800 of them, and climb to the Deir, or Monastery. We lost count along the way so we’ll take their word on the number of steps. Figure about a 30-60 minute climb, depending on your fitness level and how often you’ll stop to take pictures of the incredible desert vistas from the cliff-side trail. 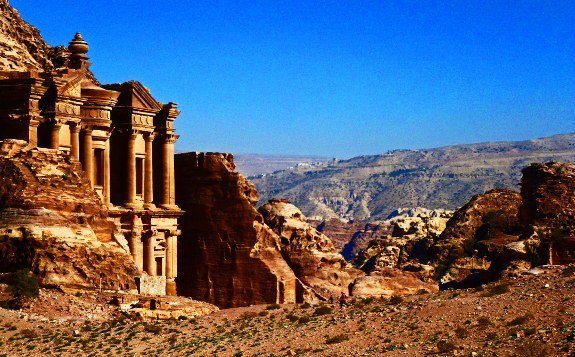 The climb to the Monastery is over 800 steps but well worth it.

The monastery at Petra

Along with the Treasury, the Monastery is one of the must-see buildings at Petra. (Note: It’s pictured at the top of this story.) Built around the 1st century A.D., it’s believed to be a temple dedicated to King Obodas. Its facade is carved out of the rock in a similar style to the Treasury building, but we only realized its massive scale when someone walked in front of the 30 feet tall doorway. Visitors to the Monastery share a sense of easy camaraderie after making the strenuous climb. Those less inclined to walk can ride a donkey to the top but, quite frankly, watching them scramble over the slippery sandstone with their clunky hooves made us glad we trusted our rubber-soled hiking shoes instead.

At the summit we met a teenaged Bedouin girl named Amup who offered to show us around the Monastery. She helped Larissa scale  the high wall leading into that massive doorway (Michael was content to stay behind and take pictures) and then led her to some hidden caves that offered tremendous views and photo ops.

When we offered to pay Amup for guiding us, she refused, stating proudly that she did this for free. She said, “However, if you are interested perhaps you might like to buy a bracelet?” Such is the way of the Bedouin, theirs is a unique code of honor: they will offer services for free in the hopes that you will consider purchasing some of their goods. Unlike the relentless hounding we’ve seen in other countries, we found this approach refreshing, one that has worked well for them for thousands of years. 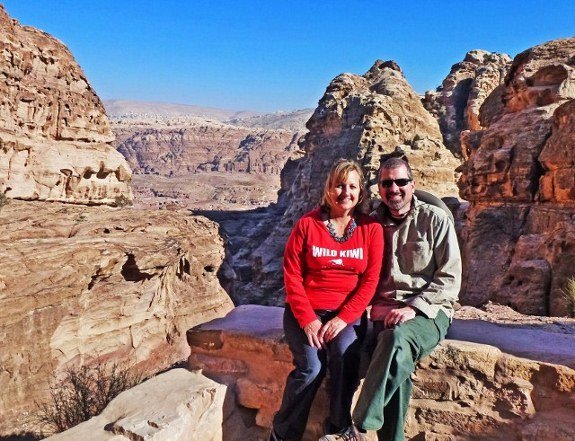 Although Petra is popular, its sheer size makes it easy to break away from the pack. The outline of some of the buildings is visible carved into the rock in the valley behind us.

A side trip to Little Petra

The next day we visited Little Petra, a suburb of its big brother. It’s nestled in a slot canyon with similar structures carved out of the cliff as we saw at Petra, but on a much smaller, and more approachable, scale. We clambered up a set of ancient weather-worn steps to view intricately painted ceilings in a 1st-century A.D. dining hall. The surprisingly intact paintings portray cherubs, vines and birds. While a tour of Petra may take a day, Little Petra can be visited in an hour. Its splendid isolation, sans crowds, enables the visitor to imagine they are two millennia back in time. 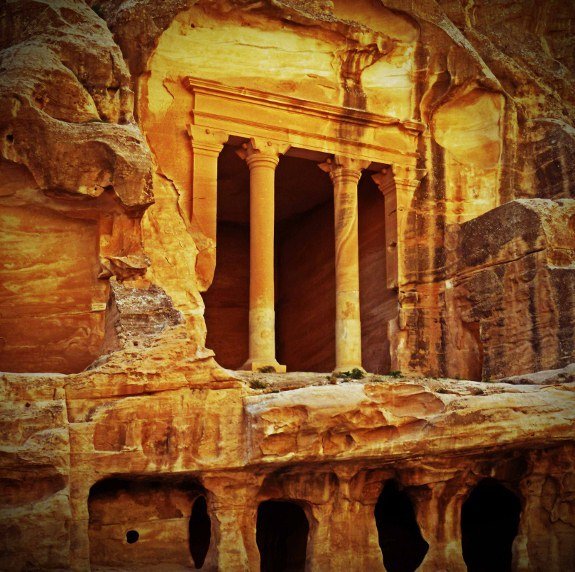 The only thing Little Petra lacks is crowds. 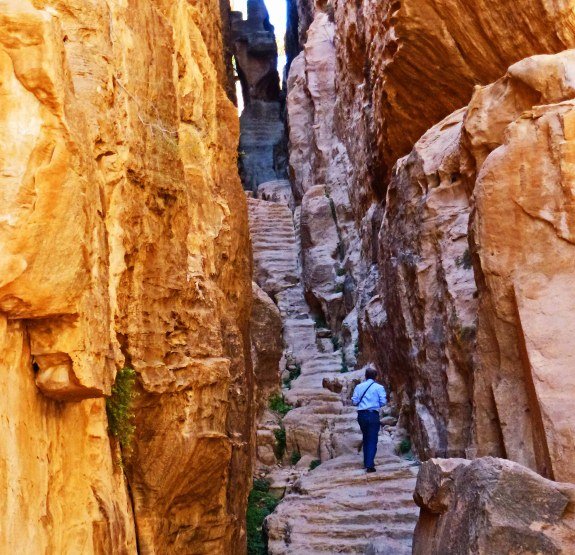 Little Petra sits in a narrow slot canyon leading to these weathered stairs. 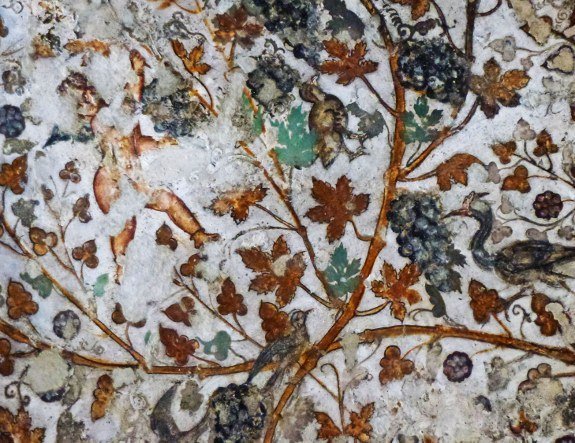 The painted ceilings at Little Petra are true survivors.

We then drove north to Amman, Jordan’s capital city, to seek more wonders of the ancient world. Although we hail from the City of Brotherly Love, we weren’t aware that the original Philadelphia was located here. During Roman times the city was named Philadelphia after a ruler of Egypt, King Ptolemy II Philadelphus. It was an unexpected sight to be in the Middle East and see the name “Philadelphia” emblazoned on tour buses, signs and postcards. 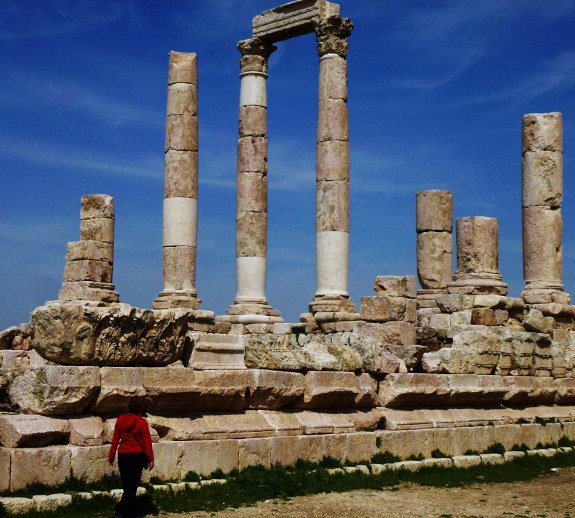 Larissa walking down the original streets of Philadelphia.

The streets of Philadelphia are best explored in the Citadel, an area that has been occupied for over 7,000 years. Originally the city’s acropolis, it offers commanding views of modern Amman from its rocky perch. Surviving Corinthian columns from the temple of Hercules, built in the 2nd century A.D., pierce the blue sky. Remains of Roman fortifications and a 6th-century Byzantine Church also dot the hilltop. Next door is the Jordan Archaeological Museum and Gardens. The ancient artifacts on display include a plaster statue from around 6,500 B.C.

Below the Citadel an well-preserved Roman theater lies cradled in a valley. It is still used for open-air concerts. On the day we visited the entertainment was provided by ten-year old boys and girls using the stage as an impromptu soccer pitch. The Theater’s cute cousin next door is the petite Odeum, operated for smaller performances. 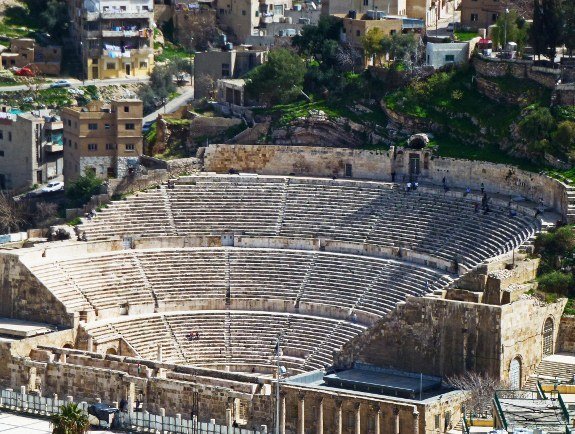 The ancient ruins in Jordan are some of the best to be found anywhere, yet crowds are practically nonexistent. Many people only make a day-trip to Petra from Israel, however Jordan has much more to offer. Little Petra and the Roman ruins in Amman make it worth a longer visit. The country’s compact size makes it an easy place to drive around for a week and see everything.

Meanwhile, back at the cave, we dug into a meal of zarb prepared by our Bedouin hosts. Lamb, rice, tomatoes, potatoes and herbs were placed in a pot buried in a hot pit under the sands and cooked for hours, a Middle Eastern version of a clambake. The lamb was so tender we pulled it apart with our fingers and scooped up the rice with pita bread. 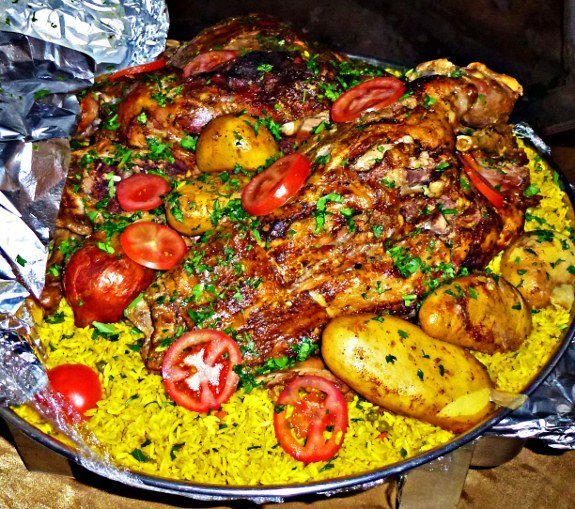 Sitting around a campfire, we looked up at the clear night sky and tried to count the constellations, but there were so many we eventually gave up. After a day spent touring one of the most incredible sites in the world we settled in for a chilly desert night. Considering all the roaming we’ve been doing for the past year, a cave in a Bedouin camp felt remarkably like home.

The next time we return, we plan to check out more Places to visit in Jordan. What would you recommend seeing?

A glimpse behind the security wall in Israel 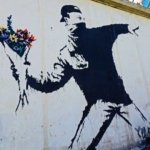 5 free things to do in Copenhagen
Scroll to top