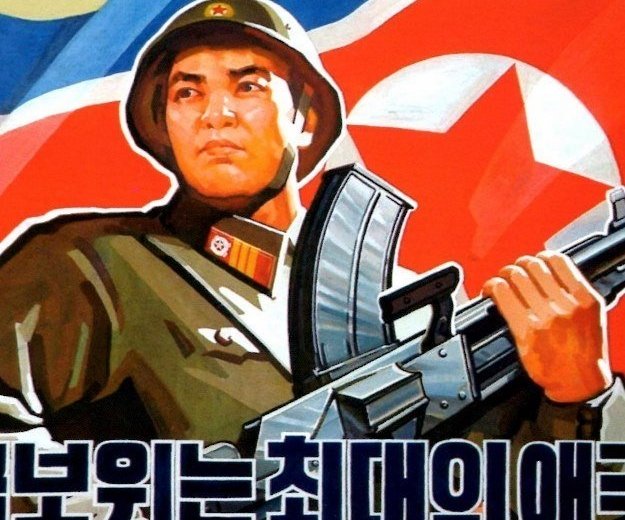 We’d like to share some images of North Korea from postcards we picked up in Pyongyang. Some of them display the incessant propaganda while others are images of the modern city center.

Unless you’ve avoided all media, you’ve probably noticed that North Korea has been in the news quite a bit lately. When Kim Jong Un started his mysterious saber-rattling a few months ago, we found it hard to take him seriously. But when we visited North Korea we did notice something ominous, the people really believe the propaganda fed to them by the government that they won the Korean War (without any Chinese help by the way). If they believe they won the last war, perhaps they think they can win another.

“Let us light the flames of war and pass on the flame of peace.”

Much of the iconography is similar to any Communist regime. People looking resolutely to the future while engaged in some uplifting task, here holding a torch.

It’s the stated goal of the DPRK government for the two Koreas to be one country again, with Pyongyang as the capital. The people in the background may be South Koreans. Whenever there is a protest in the South, it could just be students fighting tuition increases, in the North it is portrayed as an anti-government protest from people rallying for reunification.

“Let us fully carry out the Songun (Military First) Policy.”

Postcards portraying North Korea’s military might are prevalent. The DPRK ranks 48th in population but its military is the 5th largest in the world.

“Protect the unity of our soldiers with an iron will.”

Interesting that the woman dancing with the soldier is not wearing the requisite Kim Il Sung pin. The figures on the bottom appear to show the military and civilians working together. Soldiers are used in the DPRK to harvest crops and one holds a basket full of bread.

“The People’s Army are the core of our national defense and the pillar of socialism.”

Lots of missiles in this one so they must really mean business.

What funds the country doesn’t spend on the military are expended creating Pyongyang as a Potemkin Village type showpiece. This is the Mangyongdae School Children’s Palace, built in 1989, and dedicated to children’s afterschool activities such as sports, computers and foreign languages. With the collapse of the Soviet Union, funding for these types of projects dried up.

This postcard of the People’s Palace of Culture shows a rare sight in Pyongyang, an actual vehicle on the road.

High priority is also placed on sports as shown in the design of this ice rink.

While North Korea has its own currency, the won, visitors are required to spend British pounds, euros or U.S. dollars.

This 500-won note shows the Arch of Triumph, built to celebrate Kim Il Sung’s victory over the Japanese that ended World War II. At least that’s what they tell their people. The symbolism of why it’s six inches taller than the more famous Arch in Paris is apparently lost on me.

The Party Foundation Monument is different from similar Communist monuments. While the hammer-and-sickle of the USSR celebrates workers and farmers, North Korea adds a paintbrush to include artists in the mix. Of course that is artists who create artwork pre-approved by the totalitarian government.

Here’s the link to our rare photos from inside North Korea.

A visit to the Cambodian Landmine Museum 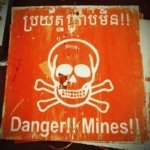 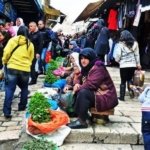