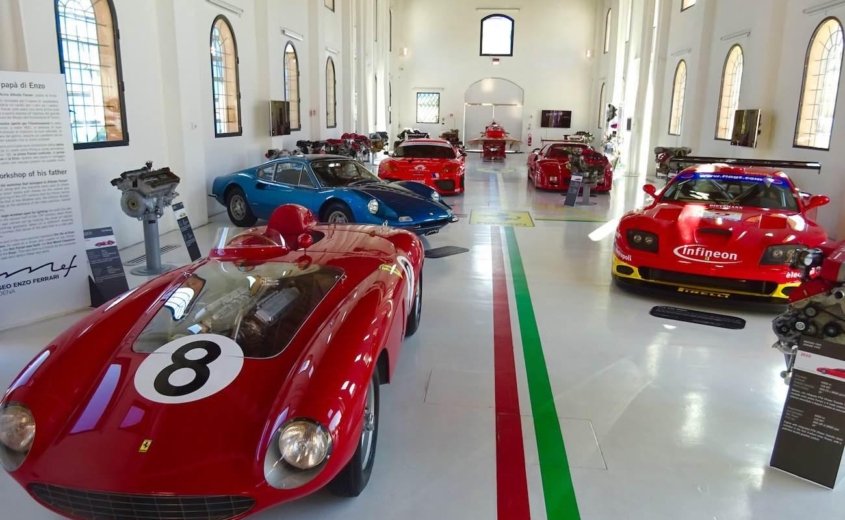 There are two Ferrari museums in Italy, one in Modena and one in Maranello, where the cars are actually built. The Enzo Ferrari Museum in Modena is the perfect setting to combine food and auto touring in Italy. Although the town is full of ancient cobblestoned streets and old stone buildings, it’s known as the “Detroit of Italy” due to its automotive heritage. It’s set in the Motor Valley where Ferrari, Maserati, and Lamborghini automobiles, along with Ducati motorcycles, are built. Located in the Emilia-Romagna region 250 miles north of Rome, visitors can tour factories and museums related to these legendary marques.

Modena is a city of contrasts. Two prominent buildings pierce the azure blue Italian sky; the 12th-century white marble cathedral and the sinewy, yellow curved roof of the Enzo Ferrari museum. (In Italian it’s the Museo Enzo Ferrari.) Modena may be the birthplace of Ferrari, the worldwide symbol of fast automobiles, but it is also the heart—or perhaps stomach—of Emilia-Romagna. Regional names such as Modena, Parma, Bologna and Reggio are all associated with famous foods.

Italians might make these famous foods slowly, but they like their cars to be fast. Enzo Ferrari was born in Modena 1898 and still leaves his mark on the city more than a century later. His bright red, road-hugging vehicles seem synonymous with the word “racecar.” Start your Motor Valley tour at the Ferrari Museum in Modena.

In the Footsteps of Enzo Ferrari

You’ll walk in the legendary carmaker’s footsteps at the original workshop and home of his father–Alfredo Ferrari. Enzo inherited the buildings at age 20, but sold them soon afterward to buy a sports car. Here you’ll get up close to the first road Ferrari ever built, a 1947 Ferrari 125 S with a 1500 cc V12 engine pushing out 118 horsepower for a maximum speed of 210 km/hour.

Since, besides good looks, Ferrari cars are also known for their engines, there are more than 30 high-performance engines on display, which is why this area is called the Museum of Engines. It’s a gearhead’s paradise.

Adjacent to the workshop a newer building’s striking yellow roof curves skyward, mimicking the hood of a 1950s racing Ferrari. Inside, more than 20 Ferraris are displayed under glittery lights as if they were jewels in a crown, although these Italian creations are more expensive than most diamonds. A soaring Luciano Pavarotti (another local boy) soundtrack creates a sense of autos as art. For more information go to the Ferrari Museum in Modena.

The Pavarotti music can get you in the mood for visiting the nearby Luciano Pavarotti House Museum. Even for non-opera buffs (like me) it’s a fascinating experience; sort of like Graceland with an Italian twist. The house where he lived for the final years of his life is set on a bucolic one-lane road outside his childhood hometown of Modena.

The Ferrari Museum in Maranello

Ferrari moved production to nearby Maranello in the 1940s. After you’ve seen the Modena Ferrari Museum you should check out the Museo Ferrari in Maranello. It focuses more on performance with a dose of Ferrari heritage and style added. The visitor’s courses through Ferrari Formula 1 race cars up to the “One-Off” gallery that on this visit included rocker Eric Clapton’s SP12EC (shown below). Make sure to enjoy the museum; the only way to go on the Ferrari factory tour is to buy one. Ferrari Museum in Maranello

After viewing primo cars, Modena is a great place to reward yourself with a fine Italian meal: it’s the town that invented tortellini pasta and the eponymous balsamic vinegar di Modena.

With so much to see and do in Modena, it can be a bit overwhelming at first. Fortunately there is a means of easily visiting many attractions within a few days. Discover Ferrari & Pavarotti Land is a shuttle service that whisks visitors to over a dozen sights related to food, wine, history and cars (including both Ferrari museums) with a stop thrown in at Pavarotti’s home. The price includes access to the attractions as well as the shuttle.

Interested in purchasing tickets? You can get them in advance here: 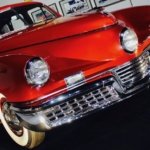 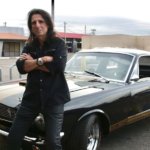