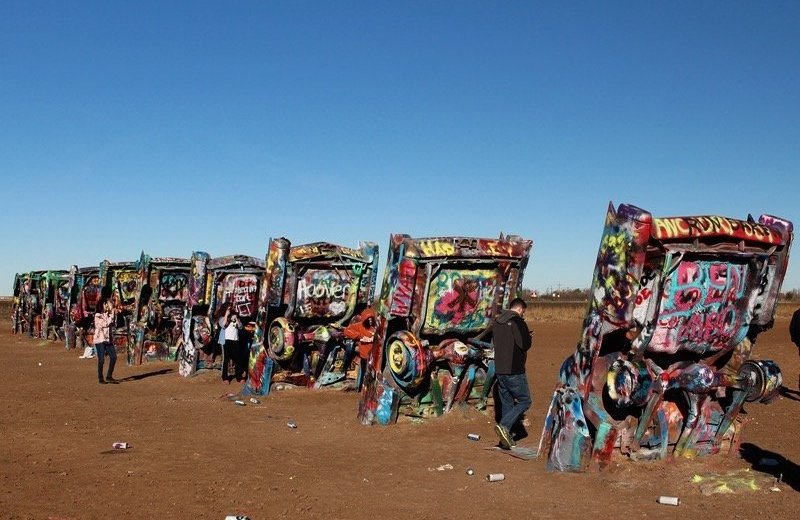 The windswept plains of Amarillo, Texas are world renowned for being the home of Cadillac Ranch, a series of tail-finned Cadillacs set into the earth like they crashed from outer space. But there are several more car sculptures of Texas nearby that can be easily visited in a two hour loop.

Visiting Cadillac Ranch and the outdoor car sculptures of Texas

The granddaddy of them all, this is the outdoor car sculpture that inspired all the others. It was installed in 1974 by a San Francisco-based art group called Ant Farm. Ten Cadillacs from a 1949 Club Sedan through a 1963 Sedan de Ville are tilted into the ground just so, creating an irresistible lure for budding graffiti artists. 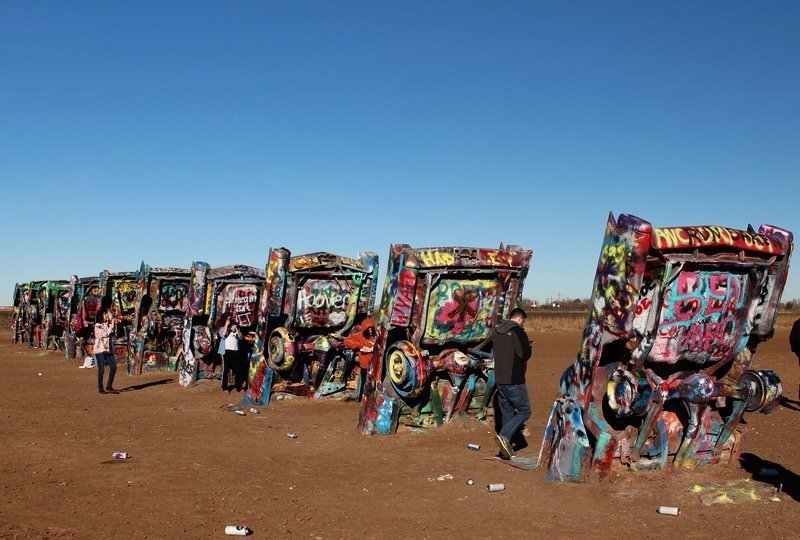 Periodically the cars are whitewashed and then the spray painting starts all over again. Located on the southern side of I-40 on the western outskirts of Amarillo, Texas. Note: If you do plan on spray painting the cars, please take the leftover paint cans with you. Many people just use them and toss them on the ground creating a mess in the open field. 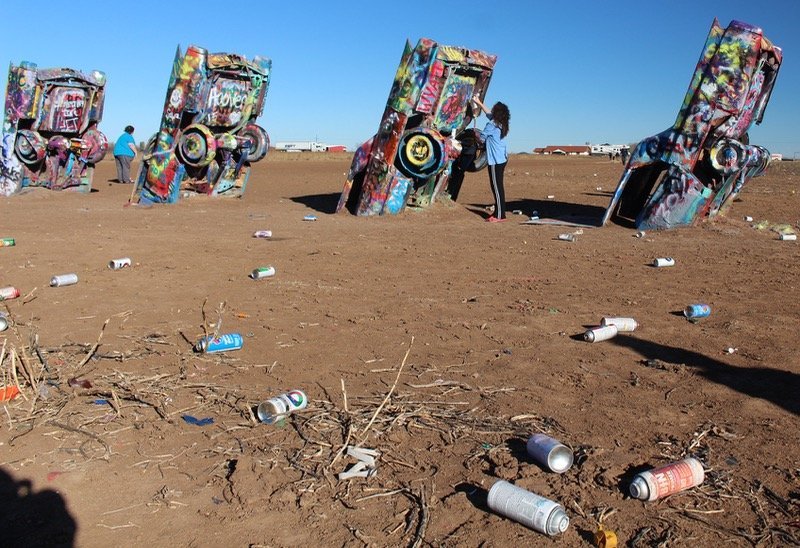 Just 3/4 of a mile east of Cadillac Ranch is this RV park which has taken on the ranch’s theme. Three vintage Cadillacs are angled on ramps out front but don’t try to spray paint these babies. They are in pristine condition. They’re also guarded by a giant “2nd Amendment Cowboy,” this is Texas after all. 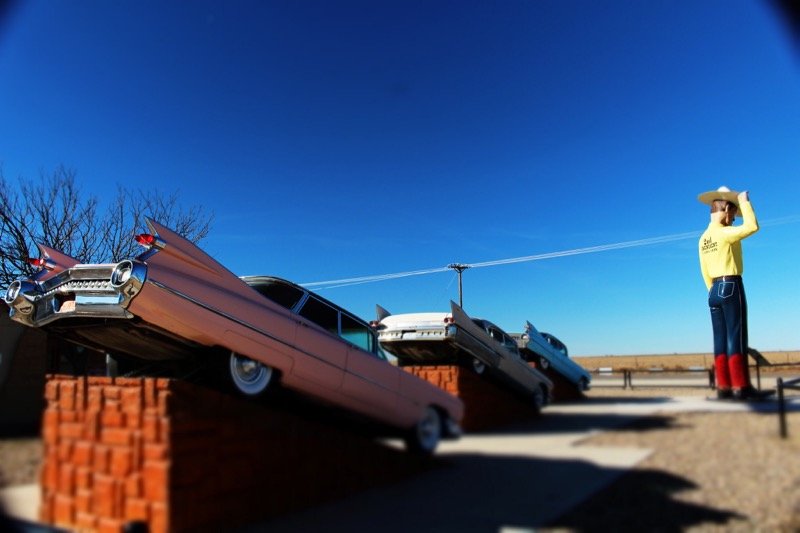 If imitation is the sincerest form of flattery, then Cadillac Ranch can claim several admirers in the area. Started in 2002 by the wonderfully named Orville Ladehoff, Combine City is a series of 14 heavy combines planted in the ground as a tribute to the West Texas farmer. 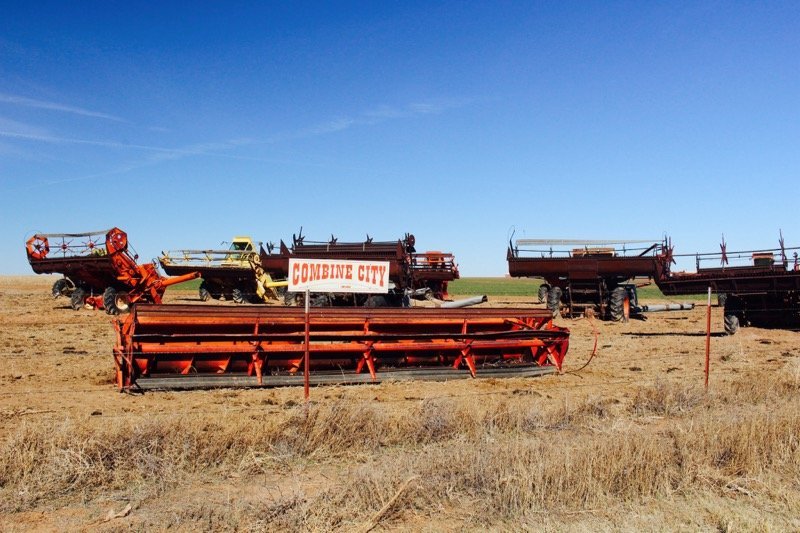 It’s located just southeast of Amarillo on the northern side of Claude Highway/FM 1151/Business Loop 40 near the intersection of South Whitaker Road in Canyon, Texas. Don’t bring your itchy spray paint trigger fingers to this one, the combines are set up behind barbed wire. www.CombineCity.com 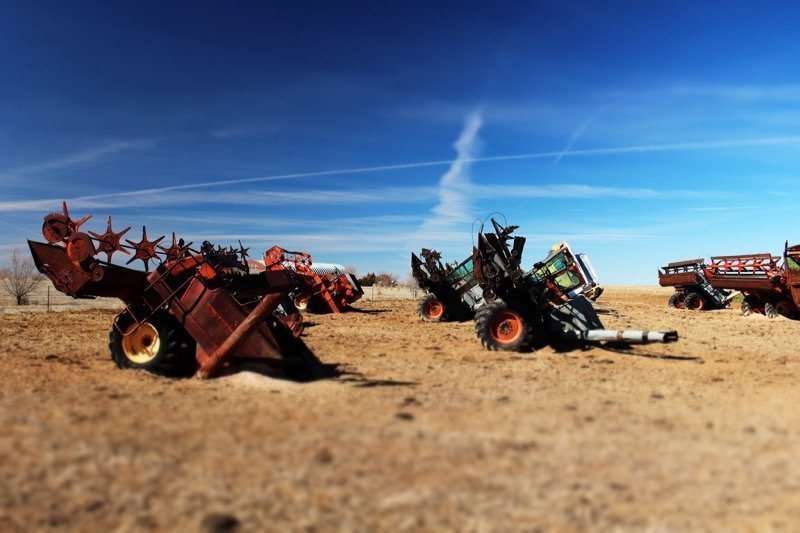 Note: Combine City can be tough to find so here’s a handy map with directions from Cadillac Ranch.

The automotive tributes continue with this array of Volkswagen Beetles stuck in the ground. To say the colorfully painted cars are mere shells of their former selves is an understatement, with some of them barely intact. 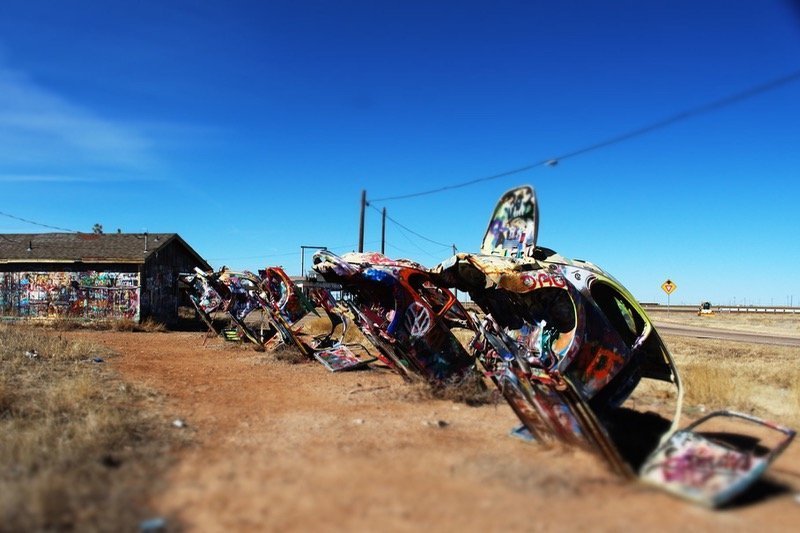 There’s also an abandoned service station adjacent to it which lends to the desolate Texas Panhandle atmosphere. It’s just south of I-40 at Exit 96 for Conway, Texas which is 30 miles east of Amarillo. 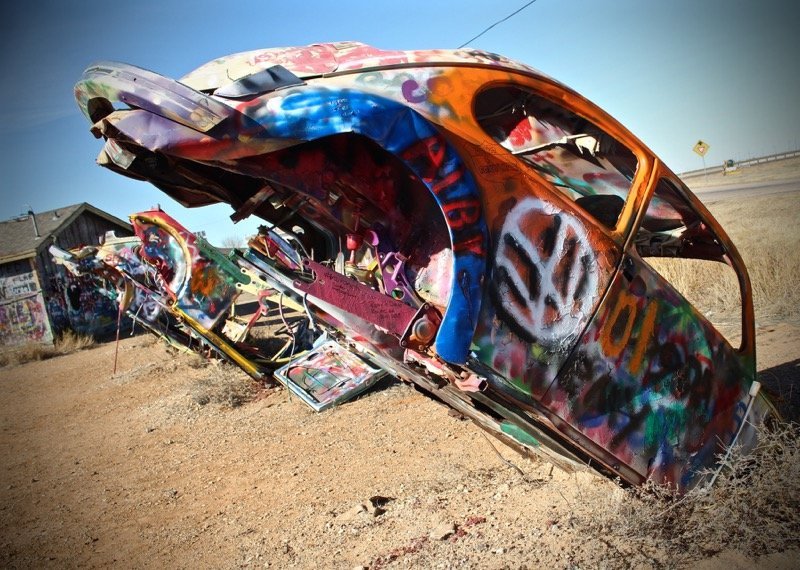 Here are directions from Combine City to the VW Slug Bug Ranch:

This museum is an outgrowth of Jack Sisemore Traveland, a large dealer of recreational vehicles in the Texas Panhandle and the oldest Winnebago dealer in the state of Texas. Sisemore started out in the early 1960s with a service station purchased with money borrowed from his grandmother. 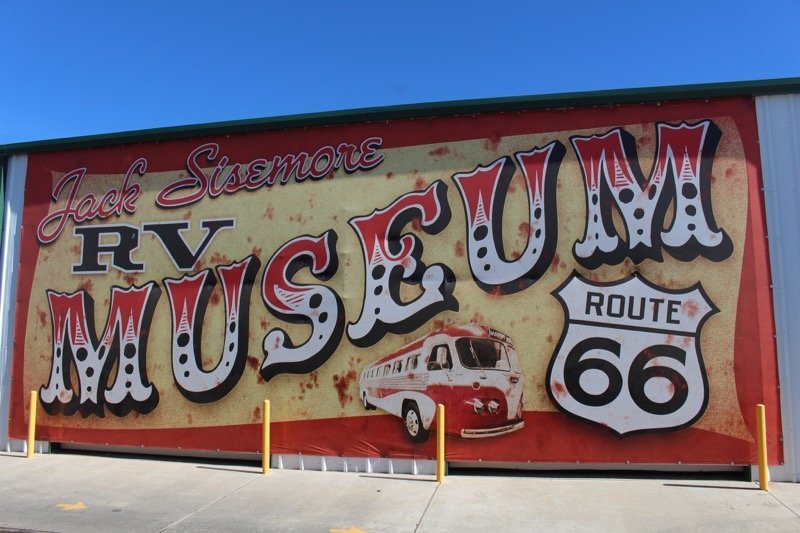 When he started taking trips in RVs he realized he should get into the business in which he’s been phenomenally successful. As a hobby he began collecting vintage RVs which he showcases in the free museum along with an impressive collection of motorcycles. 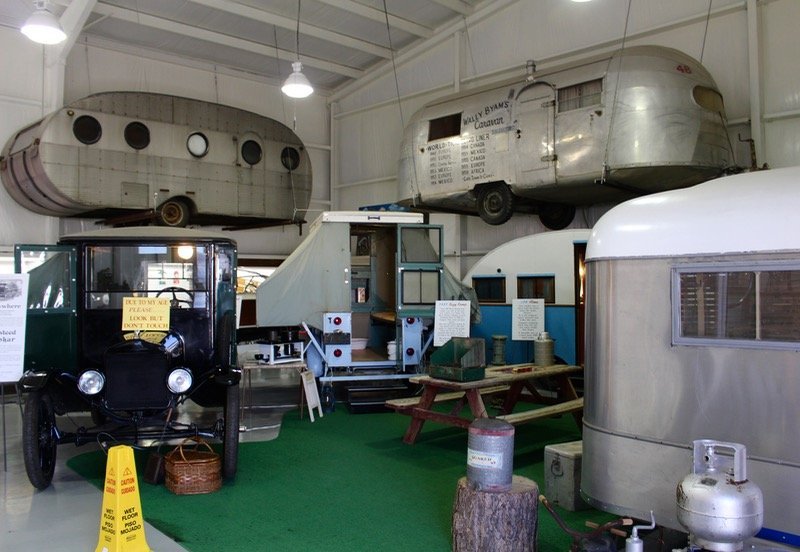 The museum is well curated by Jack and his son Trent with the vintage campers set up in tableaux with period furnishings, games and food containers.  Visitors can step inside the campers and really feel what it was like to set out on a mid-century adventure. The oldest vehicle is a 1936 Alma Trailer with a wooden interior. Also check out the period avocado and harvest gold interior in the 1972 Winnebago along with avocado colored appliances that bring back childhood memories of watching The Brady Bunch.  Film buffs will recognize the 1948 Flxible Clipper Bus that was driven by Jeff Daniels in the Robin Williams movie RV. 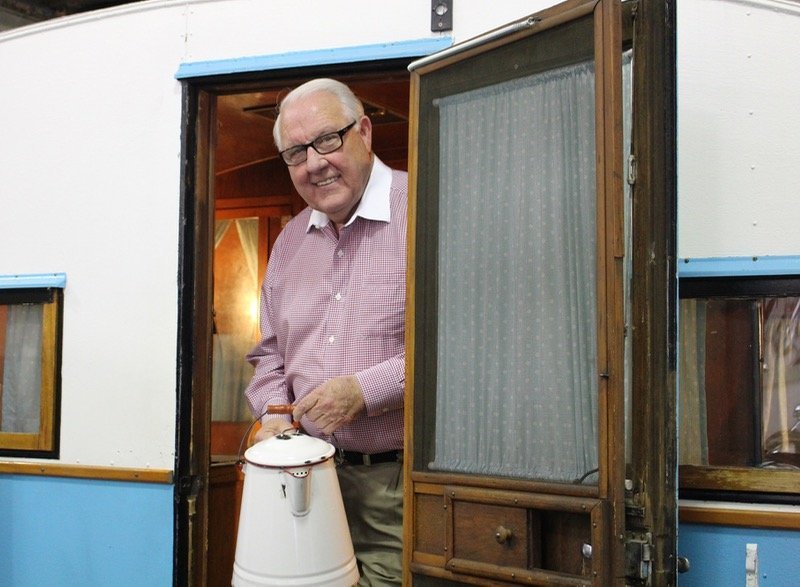 Jack Sisemore is also a legend on the Grand National dirt-track racing circuit so there’s a fine collection of motorcycles stacked among the RVs. He is one of the coolest gentlemen we’ve met in our world travels. How often do you show up at a museum where the owner offers to take you to dinner?  Location: 4341 Canyon Drive, Amarillo, TX 79110. It’s only 5 miles south of where the old Route 66 runs right through downtown Amarillo.

The Texas Panhandle is definitely the place for car buffs and Amarillo is the heart of it all. If auto attractions get your motor running, then you should read our story about visiting Carhenge in Nebraska. 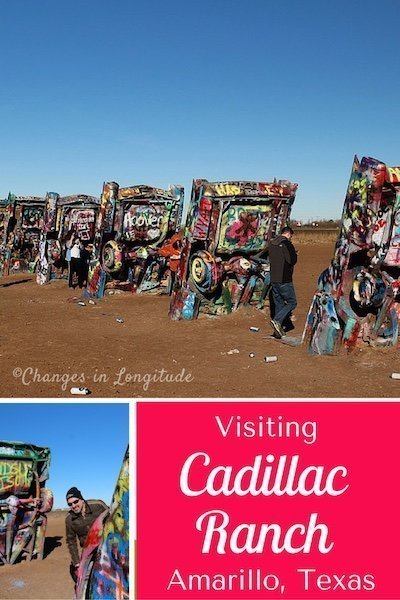 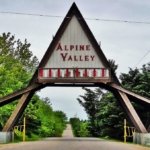 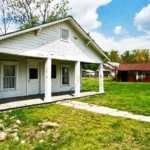